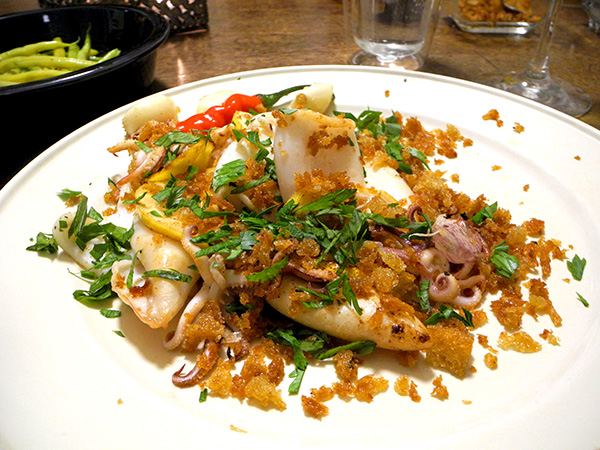 I’m surprised:  I never thought the full Italian name for this meal would fit in my subject line.  The dish, ‘calamari in padella con limone e pangrattato’ translates as ‘squid sautéed with lemon and breadcrumbs’ (which would also fit on that line), and all of that fit on the table last night.

Four months ago, after being seduced by the beautiful photograph of the dish placed on the page facing the instructions, I had pulled the recipe out of Jamie Oliver’s ‘Jamie’s Italy‘ (no, Jamie himself wasn’t in the picture).

In its first outing I had added a bed of potatoes under these delicious cephalopods.  This time I skipped the potatoes, and instead of February’s brussels sprouts, the contorno was a small bowl of thin yellow beans [fagioli gialli], also picked up at the Greenmarket yesterday.