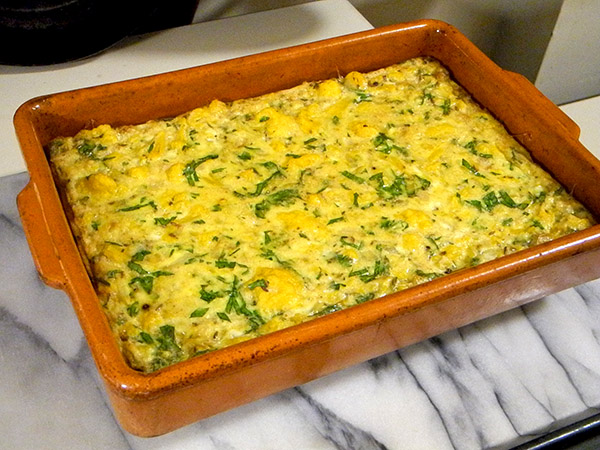 I was putting this Tunisian cauliflower frittata together on the same day I was reading the sad story of foreign visitors’ fleeing Tunisia because of warnings of terrorism.  My choice of an entrée had not been influenced by it, but the news added depth to our appreciation of this dish – and of Tunisia.

It’s a simple concoction to put together, can be done even a day ahead of time (and any leftovers taste great even the day after that), and can, and indeed should, be served at room temperature.  A perfect summer meal.

We shared it with a friend who wanted to share some excellent rosé wine with us.  Before we had made that arrangement I had bought some yellow cauliflower from one of my favorite Greenmarket farmers, but it was not enough for this recipe, so I retrieved a 20-ounce head from Eataly and saved the smaller one for another meal.

I set out plates of Speck as an appetizer, even though that element of the meal was hardly Tunisian.

The picture of the frittata resting on top of my 1931 Magic Chef oven was taken just after it had been removed from the oven the day before we enjoyed it.