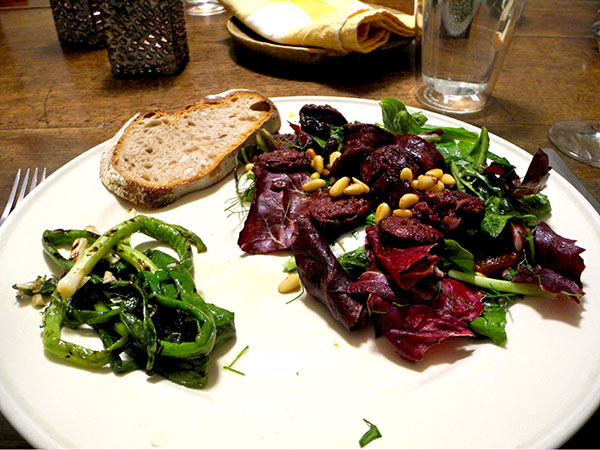 I love blood sausage, regardless which cultural environment produces it, and the Spanish do as well by it as any other.

The day was warm. To avoid introducing heat into the kitchen and dining area we were thinking of having a simple indoor picnic, but then I remembered that a friend had given us some morcilla a while back and that we hadn’t yet figured out how we were going to enjoy it.  Maybe it wouldn’t rewuire much cooking, and since I was home all afternoon anyway, following the dramatic developments in Greece, for ideas I could do some paper file browsing and an online search.   It turned out that my folders contained absolutely nothing, and neither of my two Iberian cookbooks offered any useful suggestions, other than outlines for preparations far more elaborate than I would want to undertake under any circumstances (one of the reasons I love Italian cookery so much).  Using a search engine however, I managed to assemble some sketches which I was able to put together as a rough outline for an entrée which would incorporate the morcilla.

I ended up with a fairly simple preparation which featured materials I already had on hand.