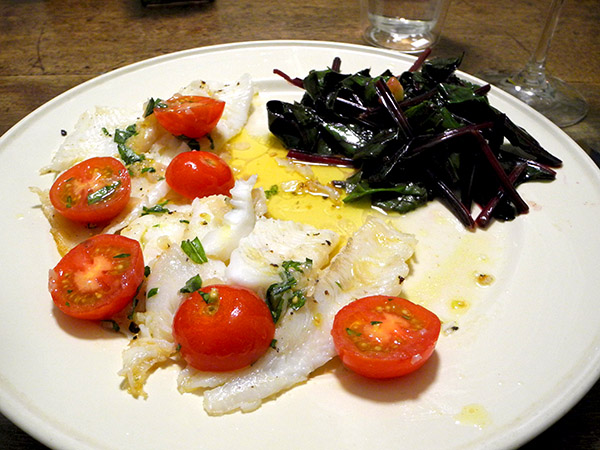 The grey sole is a magnificent fish to set on a table, not least for its perfect texture.  The flavor is mild, and when very fresh, ethereally mild. It responds best to the most delicate of treatments.  This recipe, which adds a ‘tomato butter’ to the plate after it has been sautéed, stole none of that delicacy, and, in addition to its gentle tastiness, introduced two additional textures to the dish, that of the virtually-raw, very ripe tomatoes, and the liquidness of the subtly-aromatic sauce.  I had worked with the recipe in the past, but always with substitutions; this was the first time I happened to have the designated tarragon on hand, and it was definitely the best version.

As far as the contorno was concerned, the beet greens were virtually the only vegetable I had in the kitchen that day, and I didn’t want to keep them longer.  I really love beet greens, but I’ve decided their astringency does not make them the best compliment to a delicate fish.