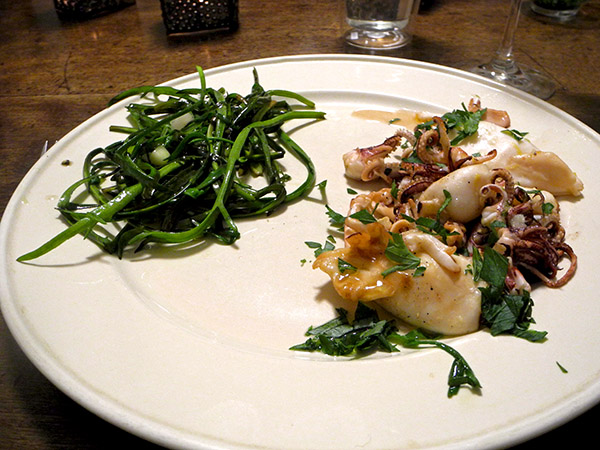 Both courses were pretty Italian.

I often regret that not enough tentacles were included in the bag of cleaned squid I purchase, but this time the balance was totally reversed. I went home with all but the last half pound of the fishmonger’s squid at the Greenmarket on Monday, which may explain both the proportion of tentacles and the diminutive size of both tentacles and bodies.  I called it a win, since tentacles add a welcome texture to the mix, and the smaller-size squid bodies themselves have a more delicate texture – and taste – than the larger, and they take almost no time to cook on a grill pan (a boon on a warm summer evening).

The squid was delicious; I think the unusual lemon and the fresh garlic I had on hand had much to do with it.

It was accompanied by a couple handfuls of an Italian green, minutina, which is just beginning to be appreciated in the U.S.

And then there was the dessert. 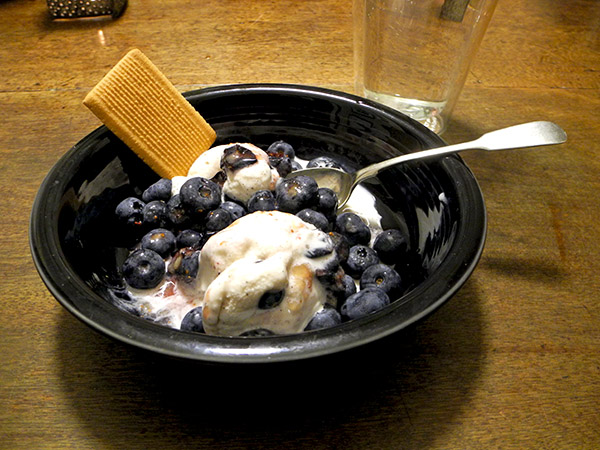 Not Italian?  The utensils.  And yes, that really is a (modern) black ‘Fiesta’ bowl; also, a (much older) ‘German silver‘ spoon.

Dessert doesn’t often get a chance to for an appearance on our table, but I try to keep it interesting when it does, and, if possible, relate it to the entrée.  In this case I stayed with the Italian theme in at least four of the five elements of the sweet:  Blueberries probably didn’t get to Italy from North America until the mid-century, but the gelato, the natural brown sugar, the syrup, and the cookie are definitely Italian in spirit, if not in manufacturing origin.

I apologize for the fact that the contents of the bowl in the image above are a little disarranged;  I had already had eaten a spoonful of the dessert before Barry asked if I didn’t want to take a picture.