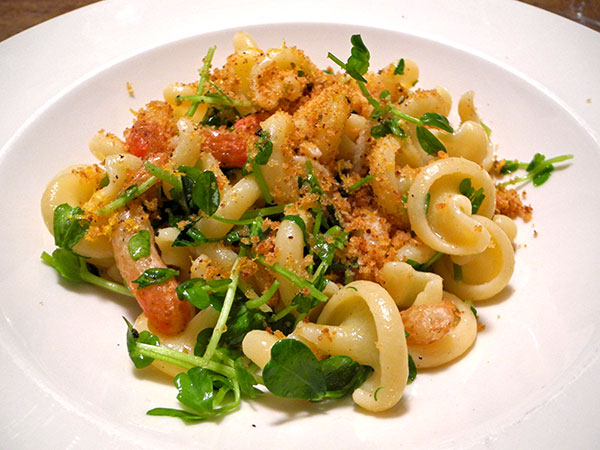 I hope I’ve never given the impression in this blog that the simpler pasta meals scattered among those which feature fish or meat are merely ‘palate cleansers’, but this meal should give the lie to any such thoughts.  Although it was almost totally an improvisation, in which I was able to take advantage of some ingredients I had on hand which I wanted to use while they were still fresh, the results were impressive, even if they might look pretty modest in any description, visual or written.

It’s a great vegetarian meal, and, had I spared the tablespoon of butter I used to brown the breadcrumbs, and instead used oil (very easily done), it would have been vegan as well.  Also very wine friendly.

I knew that I wanted to serve a pasta, but only after imagining the combination of ingredients did I realize that I had exactly the right pasta, and in exactly the right quantity, meaning a package of eight or so ounces of Afeltra ‘Vesuvio’ which I had opened a month earlier, half of its contents used for a pasta e ceci.   Any variety of this seriously-underappreciated root would do fine, but I had a bunch of tiny breakfast radishes whose greens I had included as a contorni in a meal served a few days ago, and I couldn’t imagine how I might better enjoy these micro roots.  Then there was the last of the Long Island lemon we had been enjoying for over a week, also some pea sprouts I was anxious to see used in a way which would show off both their delicate freshness and their pungency, and finally, the homemade breadcrumbs stored in the cupboard above the counter are always waiting to be a part of the right meal.

The most tedious and time-consuming assignment in the preparation of this meal was the cleaning of the dwarf radishes; everything else was a lark. 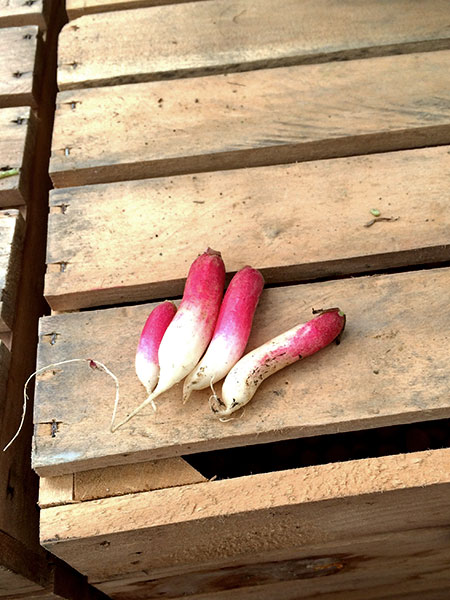 I had picked up the last bunch, and only these four remained, loose, on the box; I should have grabbed every one, they were that delicious.