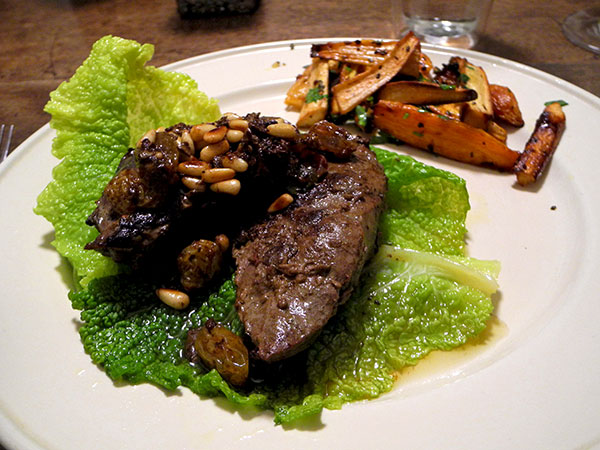 I needed a bit of liver as one ingredient of the sturdy sauce I wanted to prepare for a hare two weeks ago.  I was in the Union Square Greenmarket picking up ingredients for that special meal, one of which was indicated in the recipe as calves liver, when I realized there was no veal to be found, and definitely no veal liver to be had there.  But there were several stalls selling lamb.  One of them had lambs liver.  For me the big surprise was the size of each vacuum package.  The smallest weighed more than a pound and a half, and that was from one rather small lamb.  After cutting them into three pieces and using one section in the hare recipe, I repackaged the other two (9 ounces each) and put them in the freezer.

Last night was the first opportunity I had to use one of them as the centerpiece of a dinner itself.  I used a lamb offal recipe I think I could describe as originating, appropriately, in the British north, Lincolnshire to be specific.  The chef is Dominic, of Beaulieu Kitchen.  I have another terrific-looking recipe, which I found elsewhere.  It involves two kinds of mushrooms, and some Madeira, and it will star the package remaining in the freezer.  After a decent innards interval, I expect to be out shopping for fungi at the Greenmarket.