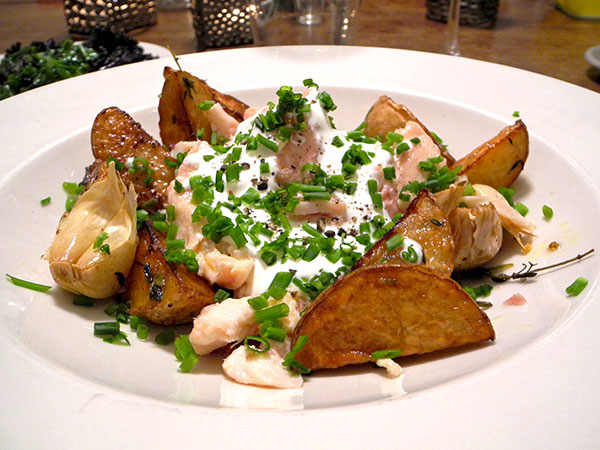 This isn’t actually roasted trout with a parsley cream sauce, Salzkartoffeln on the side.   Yeah, I was surprised too.

Not until I had already started preparation of the vegetables for a meal I expected to describe as Forelle in Petersiliensoße did I realize that I had brought home a whole smoked trout, instead of a fresh one.  Suddenly everything had to be rethought, in fact reassembled.  I can’t explain how I could have made the mistake at the market on Wednesday, or especially why I had not noticed the mistake as soon as I took the vacuum-packed fish out of the opaque outer bag in which it had rested inside our refrigerator, but I managed to make a quick recovery (did I just use a sports metaphor?), even if I did end up with tons of washed and dried parsley I now have no idea what I’ll do with.

We had a super Riesling we wanted to pair with something German, so I had decided to serve Forelle in Saueranpfersoße, with parsley substituting for the sorrel I didn’t have (I thought I had made up the parsley version myself, but it seems there really is such a dish).  When I arrived at the Max Creek Hatchery Greenmarket stall last week I had been distracted by a conversation Dave Harris was having with an artist friend of his, and had entered into it.  The friend had just arrived on a unicycle, which may help to explain why I was so distrait that I didn’t notice I had bought smoked rather than fresh whole trout.  I intended to serve the baked fish with boiled potatoes topped with butter-toasted bread crumbs and wilted kale, and last night I was already into the washing, scrubbing, tearing, oven heating, and arrangement of all the ingredients, when I realized my mistake.

My sauced whole trout entrée mit Beilage,was going to have be some form of smoked trout and potato salad.

The pan in which I had intended to place the fish in the oven with a bit of white wine had already been buttered, but now, working against time (it was getting late), I switched gears and used it to roast, with seasonings, the potatoes I had already scrubbed; I mixed a simple lemon-oil dressing, skinned the trout, then separated its flesh into large chunks in preparation for its conversion into a salad.  I couldn’t use the tons of parsley I had already washed and dried, so I wrapped the herb carefully and placed it in the refrigerator. I poured the half cup of wine back into the bottle, and returned it to the refrigerator as well, doing the same with the double cream. We try not to waste anything around here.

Although I didn’t really have enough potatoes for the recipe I had now chosen, in fact it all worked out very well.

Finally however, as it was a salad, and the virtue of the entrée’s denouement was in question until the very end, we did replace the very special Riesling with another wine, although a very good and quite interesting one.