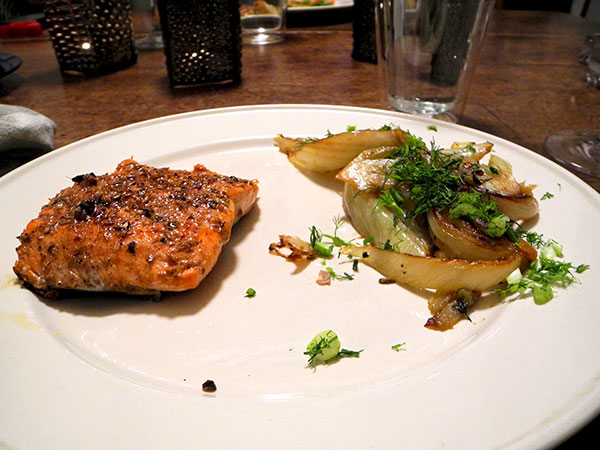 Although they start out in in the northeastern part of the great “Southern Sea”, and not the Atlantic, Salmon fillets, (usually previously-frozen, from Whole Foods) are a reliable alternative when I’m unable to bring home fresh local seafood from the Greenmarket.  I missed my fish monger both on Saturday and today, presumably because the weather over the last few days meant fishing was pretty much out of the question, at least if you weren’t operating from large trawlers.

In picking salmon, I had also decided that it would offer one of the best excuses for serving some of the sturdy root vegetables I’ve been accumulating lately.  Unfortunately there’s a limit to how many I can incorporate in one dish, and tonight I was more interested in using whatever vegetable I had in the crisper that was most likely to spoil soonest.  The pairing of salmon, with a spicy coating, and fennel (which is not even a root), roasted slowly with nothing more than garlic, turned out to be inspired even if it had been determined largely by necessity.