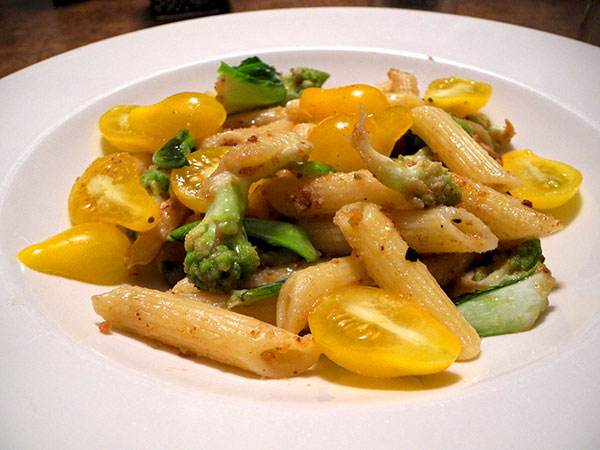 The recipe I used for this meal was published in New York magazine ten years ago, and it was attributed to Sara Jenkins, then of 50 Carmine, today of Porchetta.  It’s delicious.  I’ve enjoyed preparing it several times before pretty much as it was written, but this time I added some sliced pear-shaped yellow baby tomatoes to the top of each serving, mostly because I thought I wouldn’t be able to use them in anther meal before they had passed their prime.  I also didn’t think their juicy raw freshness would compromise Jenkins’ formula.  I have to say now that the tomato really isn’t necessary, and although I felt compelled to use them this time, they should actually have been tossed in the warm bowl after the drained pasta was added to the sauce, rather than added later.

Oh, did I mention that Romanesco is one of the most stylish vegetables you will ever take home from the market?  It’s actually perfectly art deco.