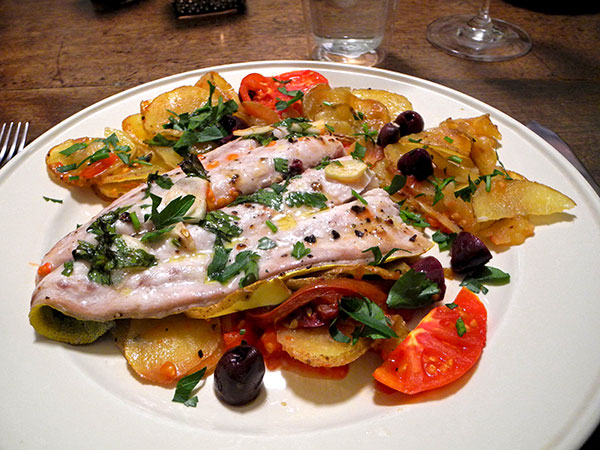 Okay, this may not be easy to explain.  I’ve never actually cooked dolphin before, and in fact I didn’t cook ‘dolphin’ tonight.  What I prepared was  dolphinfish, which is not a mammal by any stretch of the imagination: Think of all those curvaceous creatures which were used to decorate classical furniture, architectural features, and garden ornaments (I’m not absolutely certain, but I believe they were inspired, not by the mammal, but by the fish seen as the beautiful, tanned, blue-haired youth’s catch seen in this Minoan fresco from 3600 years ago. 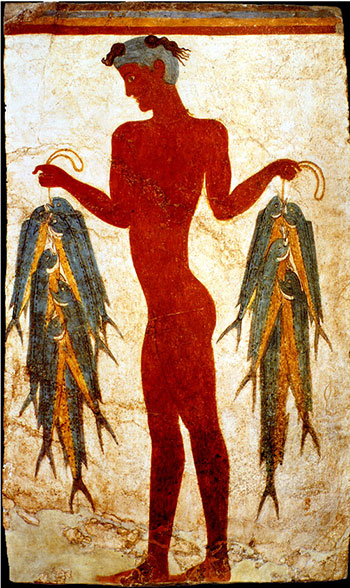 When I visited PE & DD Seafood in the Greenmarket today I saw a relatively uncommon name marked on the board at the back of the stall, and wanting to take something home I hadn’t prepared before, more or less on an impulse I asked for some of what I saw labelled as “mahi-mahi’.  I think I had always ignored the fish in the past because of the, well, …, *exotic* name always attached to it, and Hawaii sort of doesn’t fit anywhere into my personal aesthetic.  My thoughts went something like this:  Anything which went around calling itself  ‘mahi-mahi’ was certainly not something to be taken seriously, at least not as a respectable local fish or something which might be appropriate for a more-or-less Italian table.

Wade and Jan, the fisherman/owner Phil Karlin’s son and his sister-in-law, set me straight, explaining that mahi-mahi was in fact an Atlantic fish caught off eastern Long Island, and that it was also known as dorado, or dolphinfish (a name easily confused with young Sandy’s charming and intelligent friend, ‘Flipper’ – which probably explains the alias). Now the fillets began to look like something I could work with, so I asked for a piece weighing just under a pound.  I figured I’d easily be able to come up with suggestions for its preparations once I got home, but in fact, even after searching through my food library, I still had no idea how I would cook it.   Eventually, largely with Barry’s input, I decided dolphin would lend itself to the kind of treatment I usually reserve for mackerel or bluefish.  My recipe was an adaptation of one from Marcella Hazan; I obtained it elsewhere, but this is a version which appears on line now.

This is the dish resting on top of the oven, moments after it came out (I love one-pot meals, even when they don’t look like that’s what they really are). 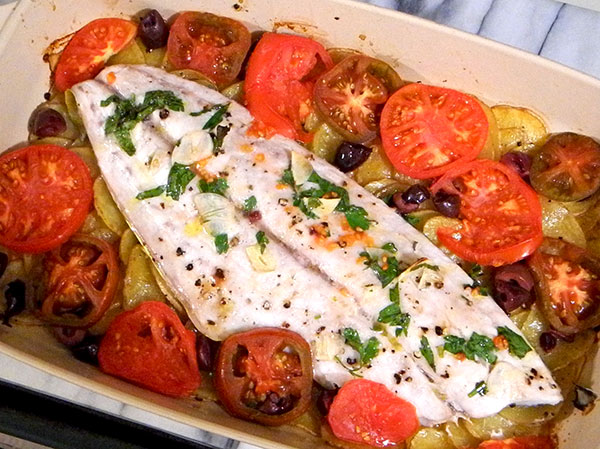 [the second image is from HistoryWiz]