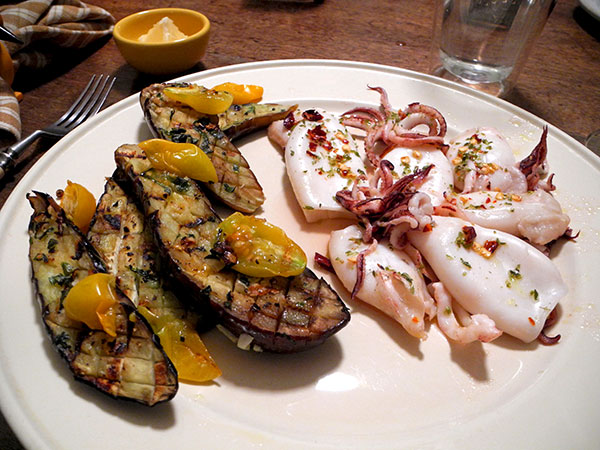 I don’t know what the experience of others may be with squid (if only because I grew up in Detroit after the war, and later, when I lived in Rhode Island in the 60’s, the term, ‘squid’ was as likely to describe a Newport sailor as a cephalopod (and we loved sailors whether or not they were well prepared).  Although I have enjoyed it, I have never prepared calamari, that is, squid batter-coated and deep fried (in fact I’ve never deep-fried anything).  That dish may be the beginning and end of the squid experience for most of us, but I have come to believe that these extraordinarily common molluscs are among the most elegant of dishes ever to adorn any table, high or low.  I also think they are peculiarly suited to both the culture and the aesthetic of the twenty-first century: They are remarkably stable in their natural population, and therefore, at least at this moment in time, among the most sustainable of wild food sources we have, and they are both incredibly easy to prepare and to serve;  at the same time, when they are served, they present just about the most beautiful , minimal appearance imaginable.  Not incidentally they also taste incredibly delicious, if you go about it right.

Tonight I was surprised with the results of working with two recipes with which I was already very familiar.  Both elements of the meal were even more delicious than my memory of how they had tasted in the past.  That might be the proof of a great, and very simple recipe (neither of them was my own), and it helps if the pairing is felicitous.  In any event, it was a small triumph for both the fish and the vegetable elements of a pretty simple meal, one which I was able to pull together in forty-five minutes or so of pretty leisurely prep. As an aside, I want to say that I also really like the way the squid bodies kind of inflate in the oven just as they finish cooking, and the smaller ones pretty much stay inflated, as can be seen above.

The squid recipe was from “Italian Easy” and that for the grilled eggplant was from Mario Batali’s “Italian Grill” (I replaced the suggested fresh oregano with fresh basil, in deference to the the dried oregano I was using with the squid, and I added to the pan the last of some baby tomatoes I had on hand).