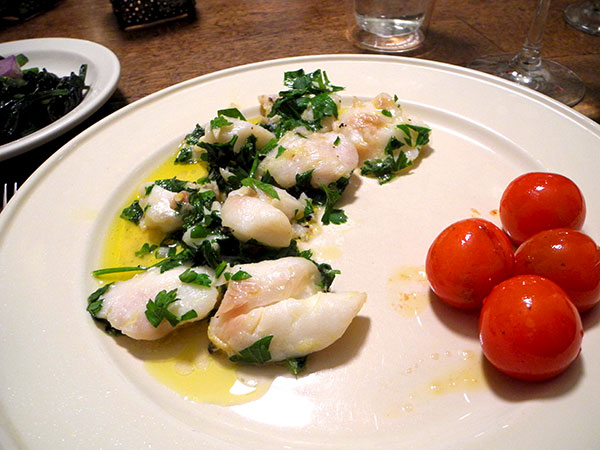 ‘Cod cheeks’?  Well, yeah, I had heard of them, but even though I lived in Rhode Island and Massachusetts for 21 years, I had never tasted them, and I had certainly always thought it unlikely I’d have the chance to prepare them.   Then I spotted the rarity (at least commercial) displayed at our local super fishmonger, Lobster Place, while I was picking up some wild Alaska salmon on a non-Greenmarket day.  I asked the very smiling guy if he would kindly put back the fillet I had just ordered, and which he had already wrapped, and would he please give me some cheek?  I got the cheek, with good humor, but I also got the cod cheeks.

I thought I’d find some fantastic recipes when I searched my sources at home, but I was surprised to find nothing in my books or my own files (clippings, mostly).  Even the internet wasn’t really much help, since I wanted to keep the preparation pretty simple so I ended up improvising, almost as I went along.

I do think I’ll try flouring or breading them next time, as I imagine that a bit of crunch is one of the few pleasures missing from the recipe I assembled.  Or  maybe next time I should just think, ‘scallops’.