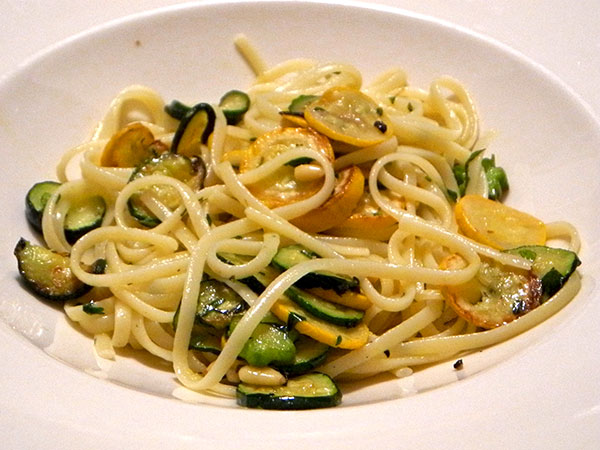 As with many of the other meals described on this blog, this one didn’t begin and end with the course described and pictured.  For several days I had watched with both anticipation and concern as two beautiful heirloom tomatoes, one red, the other green, ripened on the breakfast room windowsill. With a Caprese salad in mind, I had picked up some fresh mozzarella Monday afternoon at Eataly on my way back from the Greenmarket.  It would become part of an antipasto before a bowl of pasta which I imagined would somehow involve some small summer squash I had gotten at the Greenmarket that same day.  I dressed the tomato and mozzarella with olive oil, salt, red pepper flakes, and torn basil, and served it with slices of sturdy ‘Rustico Classico’, also from Eataly.

The pasta fixings were almost entirely improvised, with a little bit of this, and a little bit of that, the idea being to enhance and not disguise the squash.  Later, while we were finishing the meal I realized that while the courses bracketing it included dairy products, the pasta dish itself was genuinely vegan. .  It was not a conscious plan, but it happens here sometimes.

The linguine course was followed by a generous compote of peaches (hey, peaches are Italian too!) which I had also been watching as they ripened (contrary to my expectations and intentions, all at the same time), mixed with drops of Orgeat sirup, and topped with a dollop of good vanilla gelato.