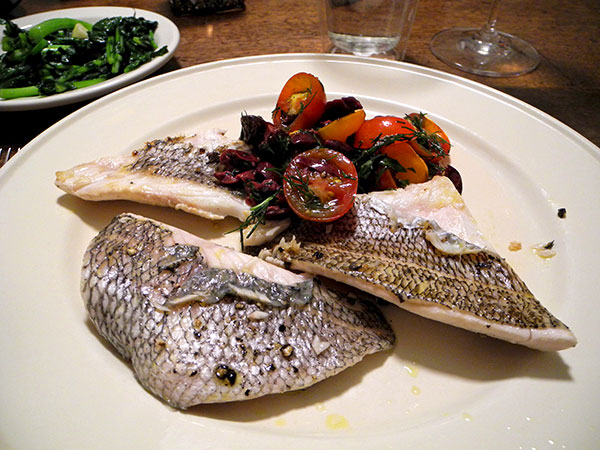 I love this fish, for both its flavor and its beauty.  When Barry messaged me a phone pic yesterday of the menu board at Blue Moon Fish which included ‘Sea Bass fillets’, I raced to the Greenmarket, hoping to get some of these guys before they were sold out (as they usually are if I set off at my usual time); I even postponed breakfast.

It was worth every bit of my exertions.  In this case the entrée as a whole was also a winner for its textures and contrasting temperatures – and for ease of preparation.

The basic recipe for this treatment I uncovered on line only minutes before beginning to put it together.  I was looking for something a bit elegant and minimal, and I wanted to avoid turning on the oven.  I also wanted something Italian-ish, to accompany some beautiful young rapini (broccoli rabe) I had picked up at the Greenmarket at the same time.

The clincher was that I had almost all of the ingredients for the recipe already on hand (I had been looking for a way to use some of the cherry tomatoes – in three colors or varieties – that I had sitting on the windowsill for a few days).  I was also interested in the fact that the fish and the salsa could both be more or less assembled ahead of time, like the rapini, and put together in five minutes before it was placed on the table.  Sophie Grigson, who contributed it to Food & Wine, called it  a “good date dinner”.