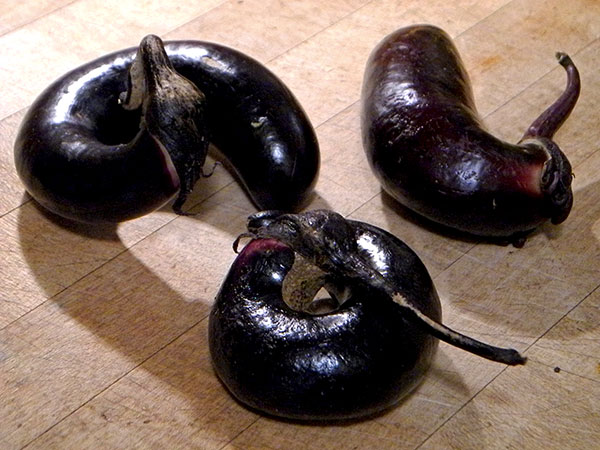 Until fairly recently, when I published food posts on this blog I preferred to use images of the food before it was prepared (and sometimes even without a meal context), for aesthetic reasons, and a few others.  I would still prefer to do these posts that way, but, if only for our own reference (much of the reason for the site in the first place) when composing new meals, a picture of the plated food can be pretty useful, if not very professional in my case.  Today, partly because I’ve become so fond of eggplant – of every kind, and in most every form – I decided I could do both, and especially since I had become enchanted by the eccentric curves of the last three in Nevia No’s stall at the Greenmarket yesterday.

Yesterday was our anniversary (our 22nd).  We would normally want to celebrate with a good lunch outside a favorite restaurant, but the weather didn’t really welcome the idea of sitting outside, and we didn’t feel like celebrating closed up inside, so we decided to do it up at home, in the evening, in front of the open window, with our roof garden beyond.  Two elements of the meal I planned required heat, but only for a relatively brief time, so the kitchen and the casual dining area adjoining it remained pretty comfortable.

In preparing the very simple meal I began by marinating a generous one-pound fillet of Striped Bass from Blue Moon Fish.  I decided to prepare the beautiful Japanese eggplant from Bodhitree, Farm ahead of time, so after I pan-grilled it I turned off the heat and set it aside in its heavy cast iron to slowly cool down.  The idea was to give us both a few minutes with a celebratory half bottle of Perrier-Joët Grand Blanc, and some elegant thin grissini.

The eggplant recipe, “”Thousand Ridges Japanese Eggplant”,  is one we have enjoyed many times.  It’s from “Mario Batali Italian Grill“.  I halved each of the screwy vegetables in the picture at the top, with not too much difficulty, then scored and spread them with a mixture of olive oil, garlic and chopped mint, then seasoned them, and placed them on a hot iron ribbed pan for a few minutes, flipping them once.  When it was almost time to move the eggplant halves to the plate with the fish, I turned the heat on under the pan, using a very low flame.

For the Striped Bass, a fish with which I was not on really familiar terms, culinary wise, and not wanting to use the oven last night, I turned to the internet.  There I found the recipe I used, from Food & Wine, only substituting the ‘sparking wine’ with white Vermouth, whose virtues are more commonly appreciated when on martini  duty (we hadn’t popped the champagne yet).  The fish, divided into two pieces, was marinated in a blend of olive oil, lemon zest, vermouth, shallots, chives, parsley, and thyme (holding back a portion of the mixture to be spread onto the fish once it was on plates).  I used a medium-hot flame to pan grill the bass until it was cooked through, turning the fillets once.  I finished them on the plate by spooning some of the herb mixture on top. 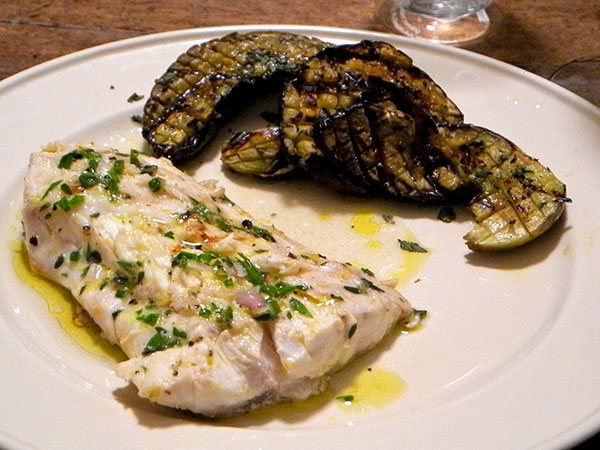