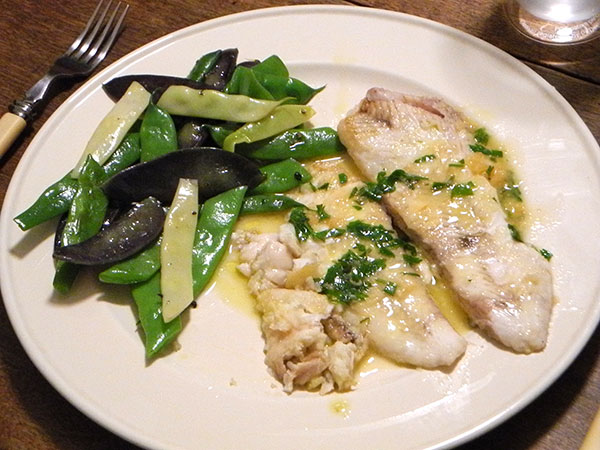 This one is almost as simple as it comes, except for the multiple plates demanded by the slightly-messy business of flouring the fillets after I had brushed them with vinegar.

The flounder fillets from PE&DD, at the Greenmarket, were sprinkled with a good white wine vinegar (here Aceto Cesare Bianco) and salt, then lightly-floured, before being sautéed in oil.  When they were cooked through, I removed  them from the pan and placed them on plates. I wiped the pan with a paper towel, and and added butter and lemon juice, along with some fresh chopped parsley, quickly mixing everything while scraping the bottom of the pan, now over a very low flame.   I poured the finished sauce over the fish.

The vegetables, also purchased today, from what I have to describe as the honestly-saintly Norwich Meadows Farm of Zaid and Haifa Kurdieh (and their terrific helpers), was a delightful medley of young flat beans, both green and yellow, and tender purple snow peas. I parboiled them together, drained, and dried them, then re-heated the legumes in oil, seasoning them with salt and pepper.  They were very simply delicious, pretty much what I usually work for, and I was really happy to see the snow peas retain their color.