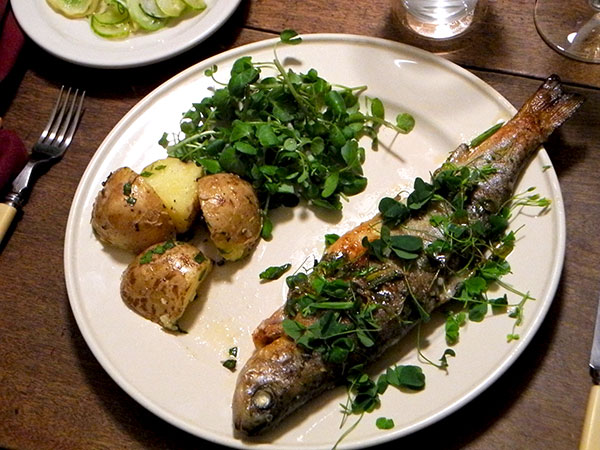 It would be Forelle Müllerin if I hadn’t overheard a discussion about (wild) wood sorrel yesterday while in the Bodhitree stall in Union Square.  Almost before I had entered the conversation, the customer talking to Nevia No and who was holding the last bunch in her hand, placed it in mine, and generously offered it to me.  I had already purchased two rainbow trout from Dave of Max Creek Hatchery;  I knew this was going to be a match made in Greenmarket heaven.  It was, and I thank you good woman.  Last night the cress stood in for the traditional parsley finish in this classic German dish.

The rest of the meal included Saltzkartoffeln, made with new Yukon Gold potatoes from Berried Treasures, finished with chopped lovage from Keith’s Farm; and a serving of lemon-and-oil-dressed wild cress (wilde Brunnenkresse), again from Max Creek.

I had salted and pressed a variety of thinly-sliced cucumbers from Lani’s Farm late in the afternoon.   After I had rinsed and drained them I added a few slices of shallots and some chopped dill (from SSO Farm), chopped parsley (excellent parsley from Eckerton Hill Farm), and a bit of sugar, before covering everything with a mixture of good vinegar and water.   This side dish/salad was a pretty good semblance of what my mother served, and she had learned it from her mother, who had learned it from her Frankish mother, who had learned it from her mother, born in 1814.  Barring the shallots substituting for a sweet onion, I think I served a pretty German Gurkensalat.