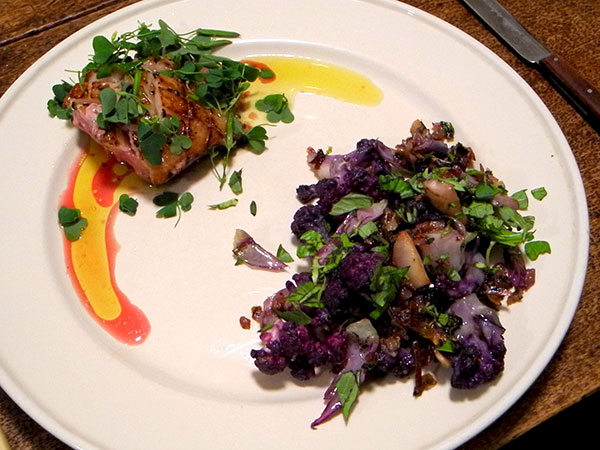 Yesterday was Friday, and so, like good christians everywhere (actually, not including us, and, are there any left?), we had sea food – duck, to be specific. Oh yes, in the middle ages, duck, as waterfowl, if you could manage to successfully poach it from the local lord’s wetlands, was sometimes accepted as “fish” for the purpose of a proper observance of Fridays and other fast days (and this was even before the Jesuits were invented!).  Acceptable as “fish” on those days were whales and porpoises, even beaver, seals, geese, also ducks, and god only knows what else (and it seems she certainly wasn’t saying).

Nobody told me about any of this while I was laden with weekly visitations of fish sticks as a good Catholic child (also, who really knew what was in those frozen batons, although the answer may have been less outlandish 60 years ago than it is today), but the gods will surely forgive Barry and me our stretching the definition of sea food, because last night’s repast was heavenly.

After an appetizer of heirloom tomatoes and wild watercress, we shared a simple duck breast (by Pat LaFrieda, a total of .74 pounds for both of us, from Eataly) which I scored and covered in salt, pepper, and a bit of sugar, then let sit for an hour before sautéing it, finishing it with a squeeze of lemon, some terrific wood sorrel (from Bodhitree), and oil.  The accompaniment was purple cauliflower from Tamarack Hollow Farm, sautéed with red onion, garlic, and chiles, and finished with mint and basil (I hadn’t enough of the preferred mint, so I sent some basil in as reinforcements).

Largely because we still had wine left, there was a third course consisting of  very small bits of two very good cheeses, “Manchester”, a semi-hard aged raw goat milk (Oberhasli goats) “peasant tome”, from Consider Bardwell, and “Landaff”, a New England raw-milk cheese from Holstein cows, inspired by Welsh tradition, made by Landaff Creamery.  Accompanying them were thin slices of of hard-toasted Pugliese bread from Sullivan Street Bakery.