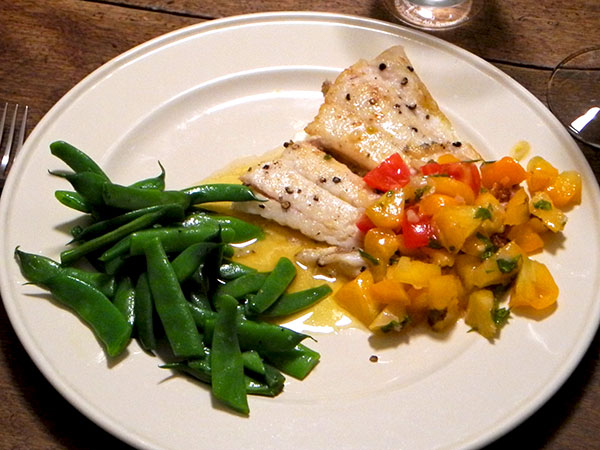 Our spell of heat and humidity broke last evening, blessedly.  Before it did I spent time, more than I want to admit to, wracking my brain and a number of recipe files and books for ideas on cooking flounder which did not involve using the oven.  I also wanted to do something other than what I often have done, even though it’s delicious.  I had brought home a beautiful fillet from PE&DD at the Greenmarket earlier in the day, and I was thinking it wouldn’t really be a proper summer feast if the windows were closed.

Further to a consideration of recipes, I was becoming a little concerned about my growing – and ripening – tomato hoard, so I definitely wanted to include some of the fruit with the fish.

The solution I came up with was a slight reworking of a recipe I found on line (never underestimate the internet’s usefulness in the kitchen, no matter how large your recipe file may be).  It was described as “Petrale sole with tomato butter” on the LA Times site, but I wasn’t  scared off by the fact that my bottom feeder didn’t come from the Pacific, or by the absence of tarragon in my electric larder.  I love tarragon, but fortunately I did have some lovage, from Eckerton Hill Farm;  it’s one of my favorite seasonal herbs, one which I regularly use any excuse to add to a dish.   I also substituted for the cherry tomatoes mentioned in the recipe two ripe heirloom tomatoes from Norwich Meadows Farm, which I chopped, perhaps into pieces a little too small.

Meanwhile I had also been seduced while at the market by some beautiful and delicious Roma beans being offered by Race Farm.  I sampled them raw and they were really flavorful – actually complex in flavor!   I’ve often been disappointed by the taste and texture of Roma beans, so I asked the farmer why these were so extraordinary. He told me they picked them while young (the beans).  It seems it works.

I wasn’t certain how good the fish recipe would be, but I decided that the colors, on the same plate with the bright green of the beans, would look pretty terrific.

In fact the entire entrée turned out to be really, really good, far more delicious than I could have imagined;  I think most of the credit should go to the freshness of  all the ingredients, and the restraint of the recipes:  The fish was simply seasoned and sautéed, the beans par-boiled, rinsed, dried, and warmed a bit with oil and butter just before the fish went into the pan.  The salsa was the only relatively complex element, although not from the standpoint of preparation, since it could also be assembled somewhat at leisure, before the beans were heated and the fish cooked.

The wine with which we accompanied it, in another reminder of summer, was a Provence rose, Domaine La Colombe Coteaux Varois en Provence 2013