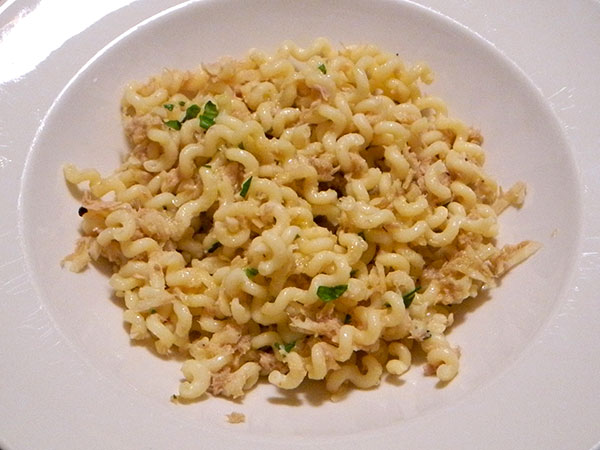 looks a little dull, and monochromatic, but the flavor is neither

This might be considered an almost perfect entrée for a hot day.  While delicious served cool, as it should be, the pasta itself of course has to be boiled. It can, and in fact it must be done long before it’s combined with the rest of the ingredients.  That means only the cook has to suffer a hot kitchen, and those fiery duties can be accomplished hours before anyone sits down at the table.

It’s Pasta Promfumata al Limone, or ‘lemon-scented pasta’.  Here it’s Afeltra fusilli con buco, combined with shredded carrots (perversely, in my interpretation, white carrots  from S.S.&O. Farm, since they are what I had on hand, although parti-colored carrots would have been spectacular), shredded tuna, garlic, lemon juice and zest, parsley, basil and lovage (my addition).   I substituted the fusilli for the recipe-specified farfalle or ‘bowties’, because I did not have the latter in my, . . . larder.

Note: Only when I began to mix the cooled pasta in with the remaining, refrigerated ingredients did I realize that it would have been better to use almost anything but a long pasta; penne would have worked fine.  Next time.

The recipe is from the late, much-missed Kyle Phillips, writing in ItalianFood years ago.