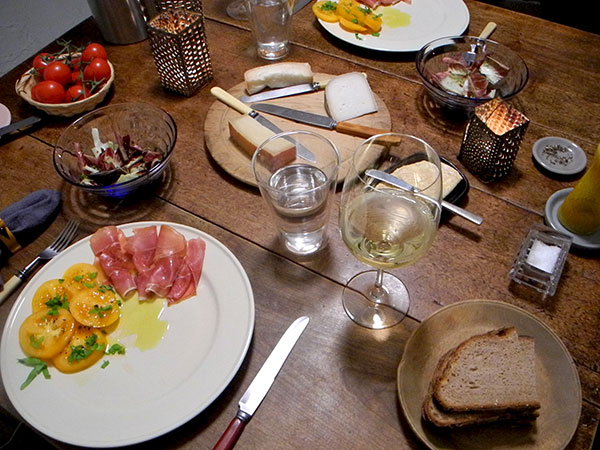 no bugs, no rain

Yes, by now it should be clear that we spent the Fourth of July in our summer place on 23rd Street, where we almost always holiday.

In the first two of the three days of the extended weekend we had a meal dominated by fish (a pretty American meal, even if, since it was in a particularly New England form, it was somewhat esoteric American).  Dinner on the second day included grilled red meat (a feast almost, but not quite of the classic American cookout sort, since lamb still doesn’t conjure up thoughts of the typical American barbecue, and because it was enjoyed indoors).  On the third day we had a simple picnic, but once again we probably missed the point of the genuine Fourth, since this picnic was indoors.  Also, there was no chicken.

I had decided to work with the warm weather, meaning I would avoid cooking altogether, so I assembled what we call a picnic, something we do on occasion to vary the kitchen routine and to enjoy an even more leisurely pace, whether before, during, or after dinner, than I can normally arrange.

All of the food was gathered from what we already had on hand, making the meal even more relaxed.  There was prosciutto (packaged, from Whole Foods, and honestly quite good); sliced yellow tomatoes from Stokes Farm, topped with Mountain Sweet Berry Farm lovage; a small simply-dressed salad (treviso from Queens County Farm, topped with chives from S & SO Produce Farms);  four cheeses (Paglierino and Salva Cremasco from Eataly, Willoughby of Cellars at Jasper Hill from the New Amsterdam Market, and Garrotxa from Citarella); and an Italian rye bread from Eataly.

The wine was an Australian, Yalumba Y Series Viognier 2013

Oh, and those red tomatoes? They were only table decor this time.