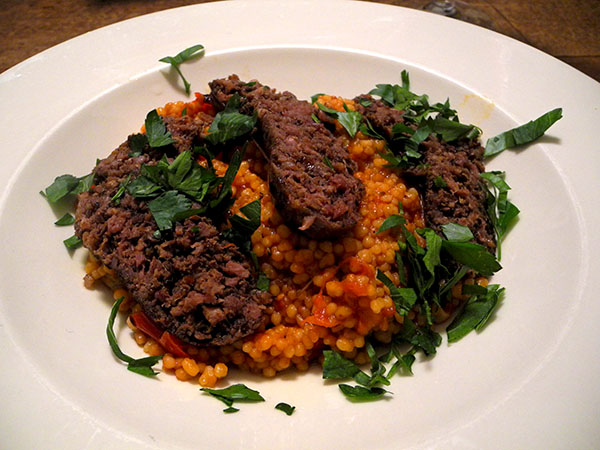 I had picked up the duck sausage at Hudson River Duck Farm in the Union Square Greenmarket on Wednesday, along with what has become a regular choice, one fresh duck breast. Both were part of what I had thought of as a catalog of the makings of good sturdy meals for the duration of our current cold snap. We had enjoyed another the breast fairly recently, so on Thursday I decided it was the sausage that I’d prepare for dinner.

I also had a supply of roots, and other vegetable fare on the heavy side. The season (January), and this year’s unusually severe arctic weather in particular, meant that local green vegetables were going to be difficult to include in these meals, although I do have one or 2 possibilities. T hen I remembered the jar of couscous that had been sitting on the top shelf of a kitchen cupboard, and the significant participation by green vegetables suddenly seemed less critical: A garnish of fresh parsley might actually be enough this time.

Having decided that the sausage and the couscous would make a great pair, I had to figure out how I was going to cook these tiny pasta beads, essentially what couscous is. I looked into my own small file and spent some time on line, but I hadn’t quite resolved anything before the deadline that I had assigned myself to begin cooking had arrived.

I ended up winging it, and spending more time stirring the couscous than I had expected, while regularly adding more water.  But it was delicious in the end. I can’t give a fully useful account of my process this time as I would like, but I promise something better when I next undertake cooking this wonderful side dish.