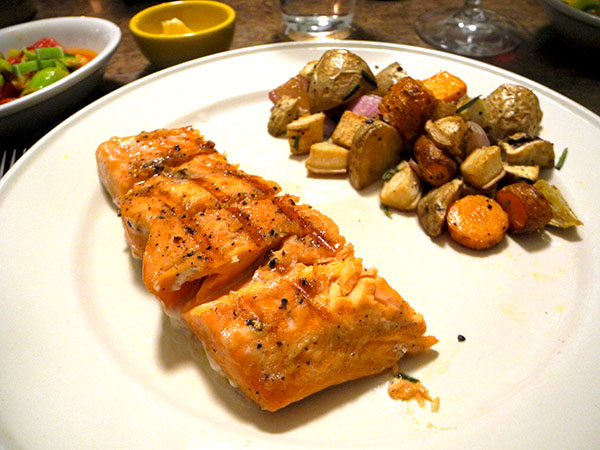 The storm on Tuesday meant that our local fishermen did not go out, which meant there was no fish in the Greenmarket on Wednesday. But we had a guest for dinner once again. I wanted it to be at least a little special, but we had enjoyed goat chops the day before and I didn’t want to serve a meat entrée 2 days in a row.

Although I could have devised an interesting pasta dish, I didn’t really have any what I would call starring vegetables on hand, so that didn’t inspire me. While I knew our friend had said he was not a fan of salmon, I decided to take a chance with the wild Coho fillet available at Whole Foods. While it’s a treat I can ‘reel in’ almost any day of the week, and sometimes it’s not even been frozen, I still think of it as special. It’s not local but it it’s wild, not farmed salmon, probably not the species or form of this fish generally available in Germany.

I had what I thought would be some excellent vegetable accompaniments for the recipe I had in mind, so I really looked forward to putting this meal together.