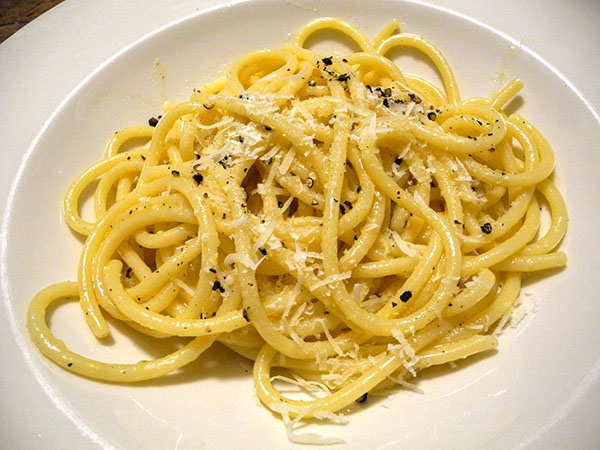 There are few dishes simpler to put together than this one, and almost none which would be as satisfying – regardless of how hungry a diner might be.

Last night I didn’t have a thin pasta like bavette, a linguine fini, or even a penne, each of which I believe I have sometimes used over the years, so I cut open a one-kilo package of bigoli instead and weighted out 8 ounces. I thought I had violated a tradition in using these thick long tubes, but when I went on line later to check on what the classic cacio e pepe was, I came across a number of sites describing bigoli as the pasta of choice.

There also seems to be some disagreement about the cheese of choice: Most recipes indicate pecorino, some pecorino Romano and Parmigiano-Reggiano, and I’ve also seen ‘Cacio di Roma’ paired with pecorino Romano.

I’ve generally gone with pecorino Romano and Parmigiano-Reggiano myself, because that’s where my experience with this dish started, 15 years ago, and also because I have a soft spot for Amanda Hesser and her food writing.

The recipe is quite simple, and I’ve never really wandered from the original, described here, although without the charming introduction included in the original, 2002 article in the New York Times.

These are the ingredients I used this time: