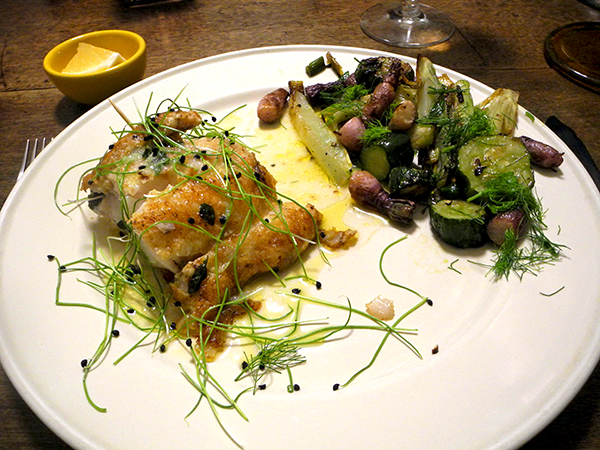 The picture looks great, but it doesn’t tell everything.

The ingredients, and the recipes too, were excellent, but I’ll be honest: I made two blunders in the cooking process, although neither was much of a disaster, even a culinary disaster.

The hake fillet was pretty thick, thicker than those I normally have, and I underestimated the time it would require to cook. I had separated it into 2 pieces after I thought it was done, and they were already on the plates before I realized I was premature, so I quickly flipped off the garnish and returned them to the pan for another minute or so, replacing the micro scallions when they were returned.

The vegetables were also less than perfectly cooked, since I had let the chopped turnip, sautéed ahead of the others, get too carbonized, somewhat compromising enjoyment of the larger mix. The solution would be to simply pick out the more charred pieces, and it almost worked.