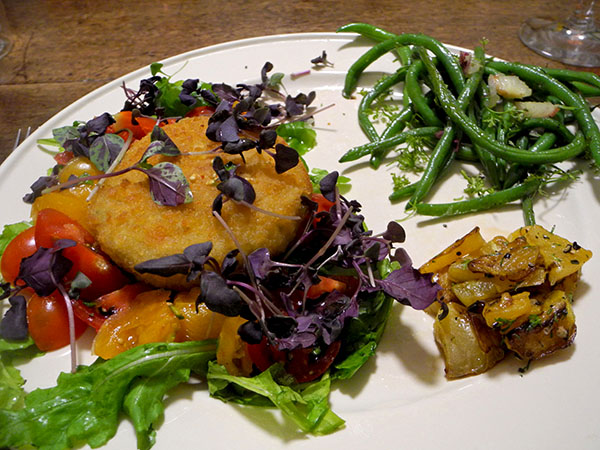 The salsa I have often prepared as a ‘bed’ for these wonderful crab cakes from the Union Square Greenmarket has no formula. Usually dominated by tomatoes of some kind, it’s always a (varying) mélange of bits of herbs and spices, often including a bit of some kind of allium.

The crab and the salsa is always accompanied by a vegetable, which, depending upon what I have, can really brighten up a color palate which would already be doing some showing off.

In this case there was a lagniappe, one small heirloom tomato, originally intended to be part of the salsa (along with another of its own kind, a Striped German, and a few cherry tomatoes). Last night it was still a very light yellow, but it had been sitting at the window for days, just as long as its companion, from the same farm, so I just assumed it too would be ripe by now.  Not paying attention, I started slicing it before I noticed that it was very firm, and that it had almost no taste. I decided a little heat might be just what it needed, and it was: I ended up with a luscious side dish of ‘fried yellow tomato’, and wished there had been more of its sort.