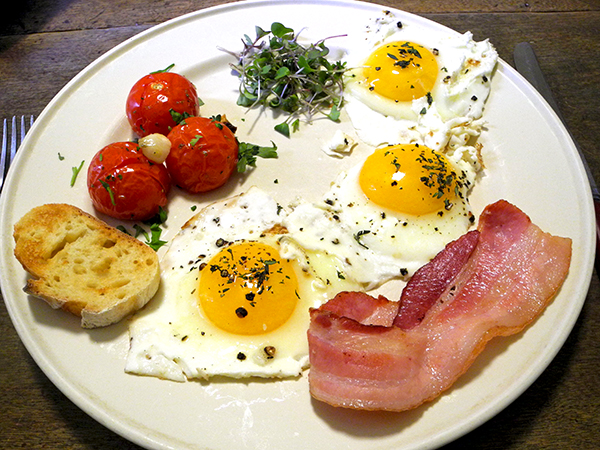 It was Valentine’s day, so I included a little deep red on the side.

This was our breakfast-but-also-lunch on this rather sweet holiday.  We don’t have bacon and eggs every Sunday, and tomatoes are rarely a part of it when we do, but this fast-breaker was put onto the table even later in the day than usual, and therefore it was lunch as well as breakfast.  I also thought the bright red fruit would be a somewhat electric reminder of the holiday just beginning.

The bottom line was that I think tomatoes and eggs are just about as natural a pairing as bacon and eggs, and including all three in an early afternoon meal made it something of a feast betimes.

Once I had sat down and was well into its enjoyment, I thought to myself, and told Barry, I felt it was one of those meals you want to go on, and on. I suspect every element of it had addictive properties.