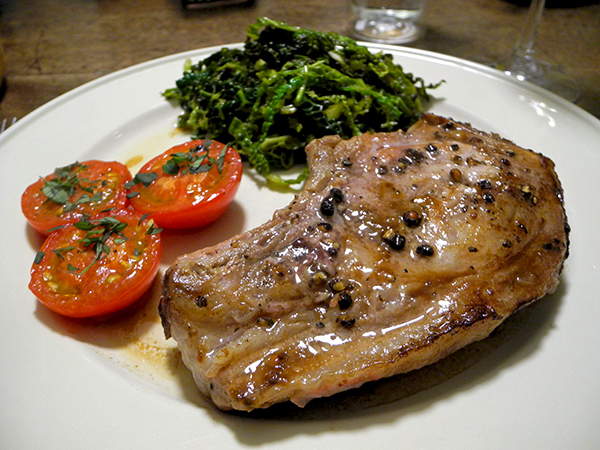 “And part of it was luck in not knowing how pigs were raised in this country, so we just did what made sense.” – Mike Yezzi

Mike Yezzi & Jen Small raise gorgeous heritage pigs on their farm in the Battenkill River Valley, and they produce the most delicious pork around these parts, maybe around anywhere. I think I can describe its virtues with some confidence: My cooking style generally means using a minimum of additional flavorings and a minimum of process, so there’s nowhere for the goodness to hide.

I bought these particular chops, frozen, in the Union Square Greenmarket last week from Mike himself, who is often seen presiding over the stall there, almost as often greeting his many fans.

This is a beautiful video made by Handpicked Nation on a visit to the couple’s farm in Shushan.

Everything about this pretty straightforward meal was superb (including the company of course, but also the wine, the music, and the unseasonably-mild evening).  All of that’s a very good thing, for sure, but it’s also weirdly interesting, since I had actually prepared every element of it in the same way at least once before, sometimes more than once, and mostly using ingredients from the same sources each time.  Nevertheless we both thought that each of the elements of this meal tasted better than ever before.

Even if I were to try, I couldn’t really reproduce any meal, especially while using good fresh local ingredients.