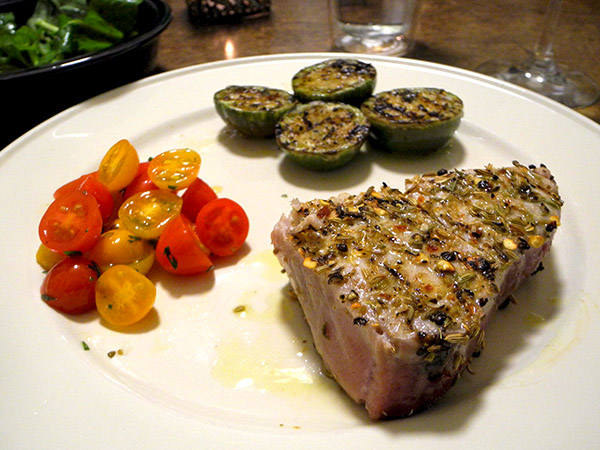 nightshades, with a little fish on the side

The meal ended up a great mix of flavors (and colors, clearly) but it was almost entirely fortuitous, to the extent that I feel my role was only to only to guide it into place.

I had bought the tuna in the morning, and the red grape tomatoes in the picture, far more than are shown here.  I expected to use the tuna that night, but not the tomatoes, since I already had some golden cherry tomatoes ripening on the windowsill.

Once I started assembling the meal I realized that 10 tiny cherry tomatoes wouldn’t even be enough for a proper garnish, so I added some of my red grape purchase to the bowl where I had put them.  Although mostly accidental, the mix turned out to be inspired; they made a great team.

The choice of another vegetable was almost a tossup, the decision ultimately resting on deciding what I already had should be used first, but at the same time would go well with the tuna.

I had been attracted to the eggplant on a Greenmarket visit two days earlier.  These four happened to be the very last of the larger examples remaining in the plastic pan in the farm stall. I thought the sign had said ‘Fairy eggplants’, although I should have known that that wasn’t what they were.   But I was in a hurry, so I just paid for them and headed home.

They turned out to be absolutely delicious, at least as good as any other type I’ve cooked, and my experience with eggplant has always been very, very good.  It was only after dinner that I took the time to investigate on line what they really were.  I found that they were Thai eggplant, of which, I’m not surprised, there are many varieties.

Supposedly Thai eggplant becomes increasingly bitter as it ages.  These had obviously not aged.

I love the vegetables.

I had already washed and dried a little arugula, which I thought I would somehow marry with the golden tomatoes, but I realized that didn’t sound promising, and it was about then that I decided to marry the two different tomatoes.

The arugula was good enough to stand on its own, so I put it into bowls on the side, by itself, very simply dressed.