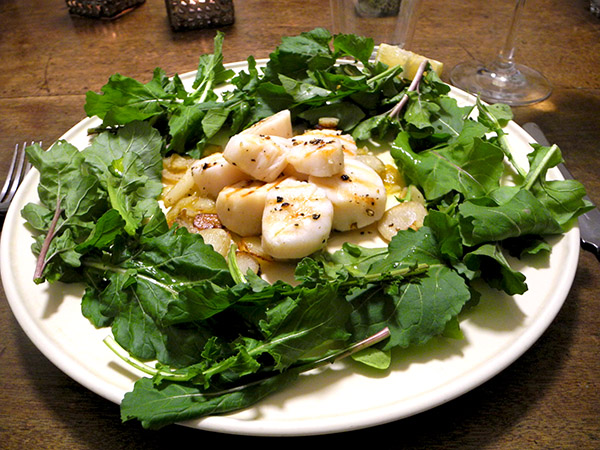 not an Advent wreath, but it does look festive; probably tastes much better

For years I had been trying very hard to find a way to use salsify.  The vegetable had long fascinated me, at least partly for its homeliness. The fact that I could find almost nothing in the way of a recipe in any of my books or files didn’t help.  It also didn’t help that I was unaware that ‘oyster plant’ was another name for the same vegetable, meaning that it was actually under my nose all along.

I had often seen black salsify in the Greenmarket, but the stalks always seemed to be too narrow to deal with easily if you aren’t just going to add it to a soup or a stew, especially since the vegetable has to be peeled. 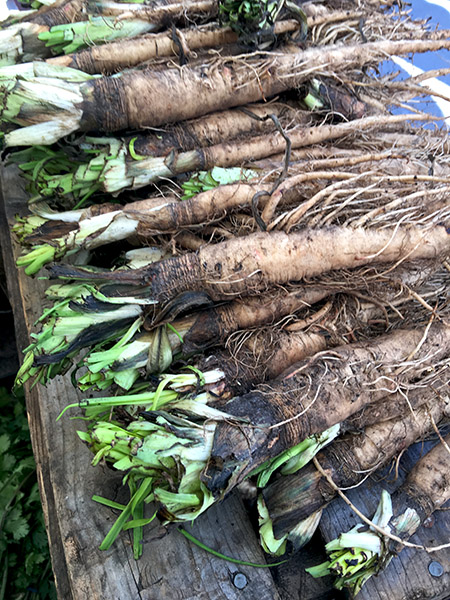 Then last week, when I spotted this beautiful row of white salsify displayed in the Greenmarket by one of my favorite farms, I finally decided to take some home.  I first picked up five or six, put them in a bag, and had already exchanged some banter about the root before I asked how much they would cost.  I heard, “20 dollars a pound”, and thought it was a part of the banter.  It wasn’t.

I thought, wow, vegetables sure have come a long way since the days when they only grew (and often died) inside supermarkets, and apparently I’m not the only one who esteems them above meat today.  I returned all but one stalk to the row where I had seen it, but three days later I returned for one more.  I still didn’t know what I would do with the vegetable, but I didn’t think I wanted to be caught short when I did.

Now I wish I had bought four.

Last night, starting too late as usual, but interested in marrying the scallops with the salsify, I looked on line once again, I found a mere sketch of an attractive recipe, but one which I decided I could work with, and it could put a meal on the table in about an hour.

The original recipe is so simple it seems like it’s intended as only a framework for others to play with.  In my version there were some serious liberties taken, one of which included a substitute for the watercress.  I didn’t have watercress, but I did have some extraordinarily luscious arugula. Those very fresh greens were so good that I ended up using a reckless amount, which meant I had to place it next to the scallops and salsify, not on them;  I decided on a circle – only for the geometric efficiency of course.

Other changes included dressing the arugula with good oil, salt, crushed pepper, and a drizzle of organic lemon.  I also Pan grilled the scallops, as I do usually, and, especially because they were fairly small already, I did not halve them.  I parboiled the thinly-sliced salsify, then sautéed it, but next time I’ll simply slice it into ¼-inch segments and caramelize them in butter. The next time I will also try for more salsify, and larger scallops (I won’t halve them), and whatever green (or ‘red’) I use will be in a smaller amount, and sprinkled over the salsify (but maybe not the shellfish).

I want to ask everyone out there reading this to please ask for salsify when you’re in your local greenmarket.  It’s a delicious vegetable, and its preparation is absolutely nothing to be afraid of, but It’s pretty expensive right now, and I can only think it has something to do with rarity.