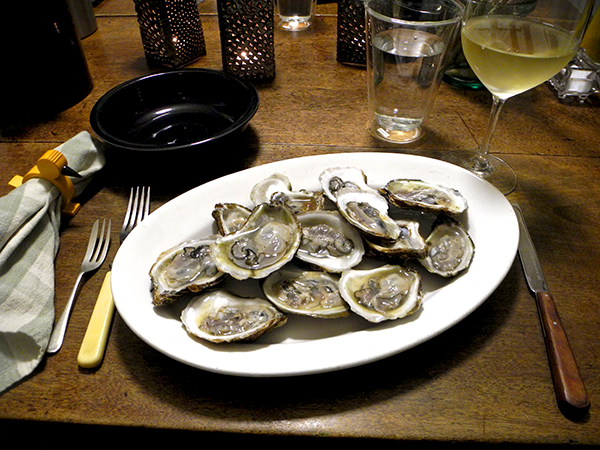 Because I already had enough vegetables on hand already, almost my only purpose in heading for the Union Square Greenmarket that day was to secure a seafood entrée for dinner.  It had only occurred to me to also pick up oysters because, while still abed, I had seen the Blue Moon Fish Company retweet of a tweet about their wild oysters. It included a link to an article in the Village Voice featuring both wild oysters and Blue Moon family anchor, Stephanie Villani, and I thought, what the heck…

Only later did we add an embellishment, in the form of a ‘theme’:  Barry had suggested that I bring home two dozen, which would make it something of special event, so we looked around for an occasion, or excuse, for a mid-week oyster feast, perhaps a birthday or anniversary, something at least a little splendid. He suggested we consider it in honor of the Guggenheim Museum first opening its doors on that day and month in 1959, ten years after the death of its patron, Solomon R. Guggenheim, and six months after the death of its architect, Frank Lloyd Wright, and I thought, why not?

It turned out that we had a tiny bonus inside the bag I brought home.  It was the first time in 50 years of consuming oysters (and often opening them myself), that I came across what turned out to be an additional, distantly-related shellfish species crouched up inside one of the bivalves.  It was only when I looked very closely at what I had removed from it while it lay on my large oval plate (you can actually see it inside the top center oyster in the picture), that I noticed it was moving; it looked like a very tiny, perfectly formed, translucent crab (see the image at the bottom).

Thanks to the internet gods I learned almost immediately that what I had in front of me was an ‘oyster crab’, also called a “pea crab’.  At almost the same moment I also learned that it was common (or uncommon) enough to be considered a delicacy by those who know and observe such things, for instance in Delmarva, and on the far end of Long Island.

So I slurped it down, but not without a tentative chew.  I figured that if I had the nerve to eat raw oysters, how was a tiny crab going to be a problem? 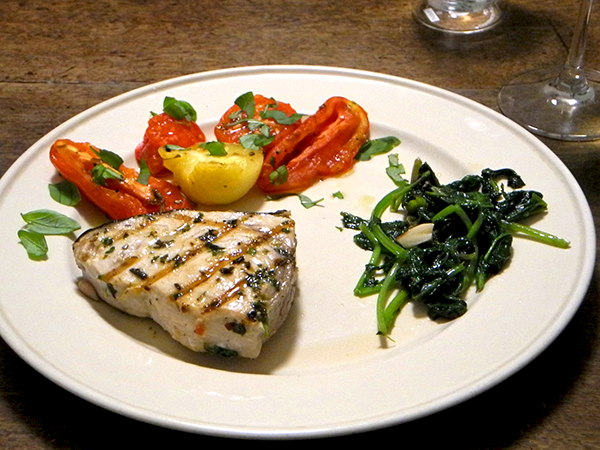 The swordfish was actually my fourth choice as an entrée to follow the oysters, the John Dory, Tautog (Blackfish), and Boston mackerel all having sold out by the time I arrived at the Blue Moon Greenmarket stall at about 11:45, which was earlier than usual, I have to say.  Because of both the time and effort I expected we might spend on the bivalves, and it being a ‘school night’, I wanted the preparation of the second course to be both fast and relatively uncomplicated.  The choice of the vegetables would follow suit.

The fish was absolutely delicious. How to account for its excellence when the only real difference between this outing with this recipe and previous ones was the combination of herbs?  Or their numbers?  What I choose is usually very much determined by what I have on hand, and therefor might never be repeated.  But then I’m almost obsessed with herbs, and there seems to me to be almost nothing that can be done wrong with them. 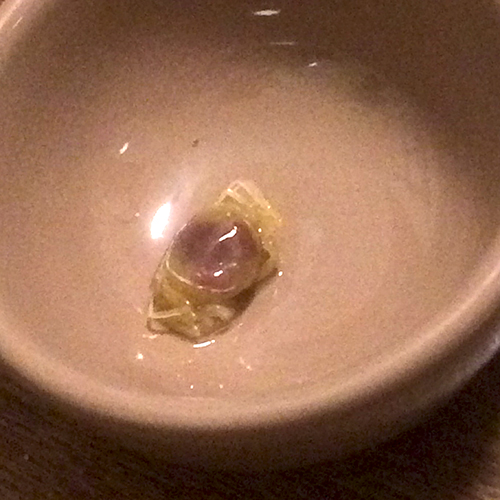 one oyster crab, coming up (note that the inside width of the bowl is only 2 3/8 inches, or 6 centimeters)