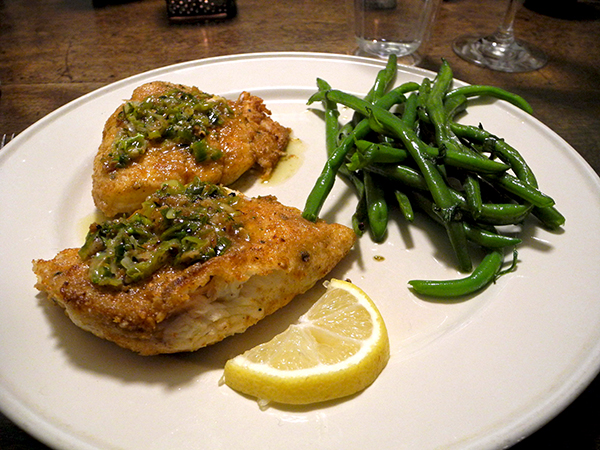 I had picked up a single large flounder fillet at the Greenmarket around midday on Saturday, and then put it safely in the refrigerator, but by the time we finally left a reception at some friends’ home, it was around 10 at night, so the clock was definitely ticking when I arrived home:  I had to come up with a treatment – and for a vegetable to accompany it – which could get us to bed at a reasonable hour (well, reasonable for us).

Preparing the flounder much as I usually do could have saved a few minutes, but I really wanted to move into new territory, so I tried something I hadn’t done before, ending up losing little or no time in the process.  The recipe I turned to, but altered in practice, was by David Tanis, as printed in the New York Times.

Of the vegetables I had on hand, I decided that the fastest to prepare, and one which would also work well with the fish, was the rather special pole beans I had also picked up today.