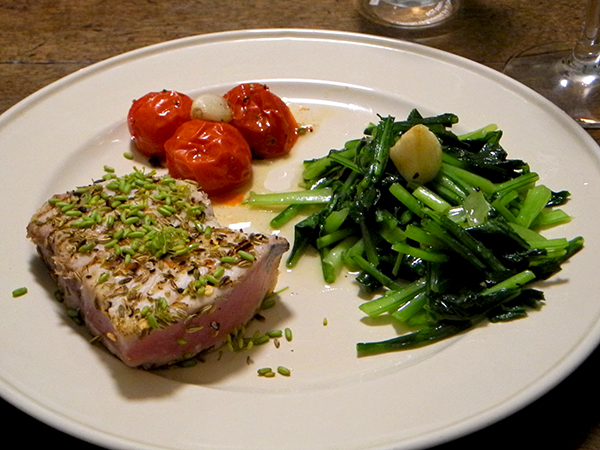 I wasn’t even going to buy tuna on Friday, but I was sort of taken by the rich color of the Albacore steaks at the fish stand in the Greenmarket. I decided to try it, because it was new for me.  I was I also interested in learning how it would differ from Yellowfin, which I think is what has always been the ingredient in one of my favorite dishes.  I looked on line and found that opinions about tuna species were all over the map;  after trying it myself, my thoughts, our thoughts, at least as respects searing the steaks is concerned, was that Yellowfin is better, for its taste and, even more, for its firmer texture.

I had also brought home lots of tomatoes on Saturday, so some of them were destined to end up on the same plate, and a bunch of turnips (Hakurei) which I had selected mostly for the beauty of their greens.  The turnips roots themselves will show up here soon.