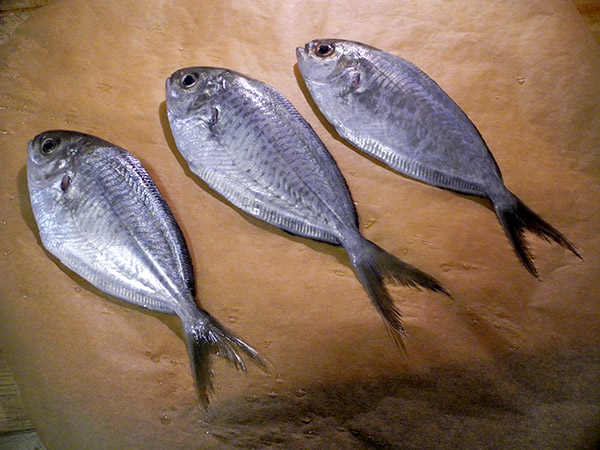 Three butterfish, their fins removed in this picture, but still waiting to be cleaned, resting next to the sink on a sheet of parchment.

They were beautiful, and they were delicious, but, note to self: I’m not likely to prepare them again. It’s about those bones.

But now, as I continue working on this post the next afternoon, I’m thinking:  They really were beautiful, and very tasty; maybe if I had a little more patience, and took a little more time with the fillet knife…? 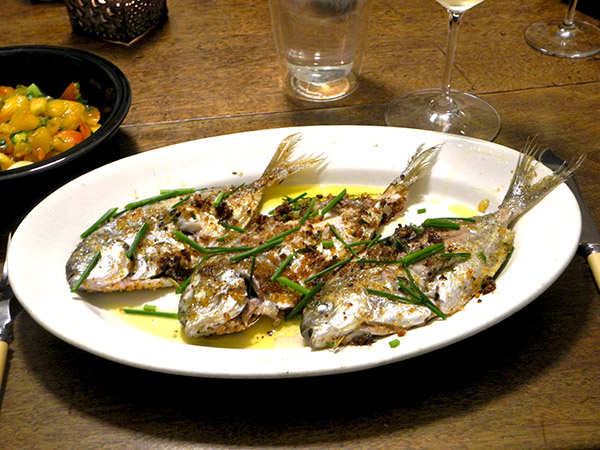 This picture shows what the butterfish looked like when they reached our ancient dining table. 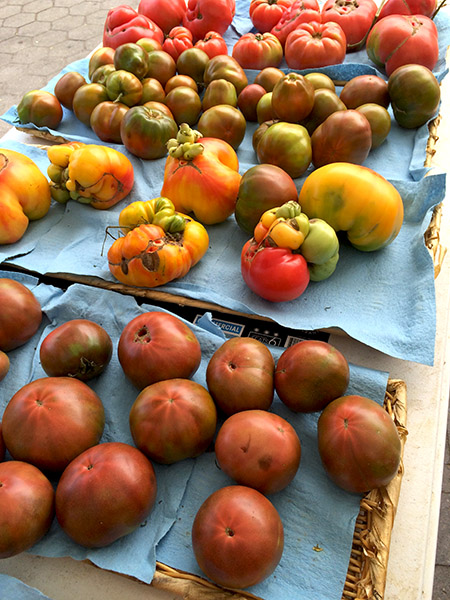 And this one includes, at the lower right of the second basket/tray from the bottom, the one-pound heirloom tomato which became a salsa all by itself.

Barry was going to be in a Catskills wilderness from Wednesday through Friday, ‘camping out’ with his Artsy coworkers.  I would have gone to the Union Square Greenmarket yesterday out of habit alone, but I also still wanted to eat well.  More and more, for us, ‘eating well’ has come to mean seafood, so seafood it would be.  Since I was going to be the only guest at the table, I decided to try to find something I hadn’t cooked before, something with which I might take a chance, exposing only myself to the possibility of failure.

Blue Moon Fish had a few butterfish left when I got there at 11:30, a very few – one more than the two visible, in fact, once Margo had scooped through the ice to find the third.  I had never cooked butterfish, but I was so excited with their simple beauty that I didn’t even think about the fact that they weren’t yet cleaned, and I also had no idea what I was going to do with them.

There was also a certain amount of pride in buying my dinner, 11 ounces of whole fish, for only $2.25 ($3.50/lb) when some popular, premium species might sell for, . . . yup, up to seven times that price.  Then there are those bones.

I cut off their fins (not quite deeply enough, it turned out, in the case of the dorsal and ventral rows), gutted them (I was surprised at how tiny was the pocket occupied by the innards), keeping heads and tails intact with the bodies, washed them and returned them to the refrigerator, to turn to assembling a recipe I might use.

I knew I might spend some time removing the fillets from the bone, so whatever vegetable accompaniment I selected would have to be happy sitting around for a while.  The decision to use a tomato salsa was more or less determined for me by the ripeness of a single large heirloom which had been sitting on our table for a few days.