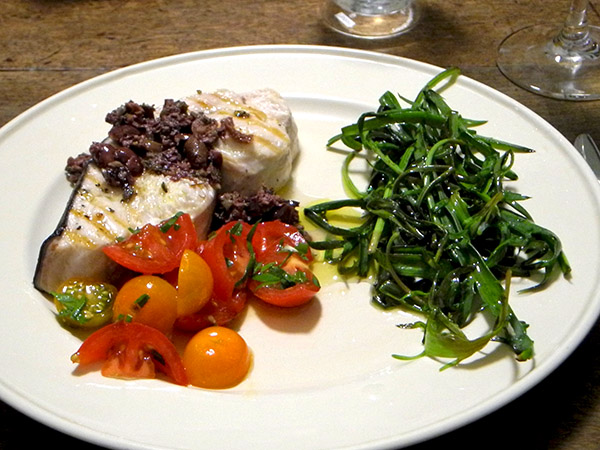 I decided to splurge, but I felt it would be okay to do so.   The average cost at the Greenmarket of each portion of fish included in our last two meals had worked out to less than $2.50, so now I would be comfortable about spending almost $10 per portion for a special treat.

And besides, Barry was returning from a campout with his coworkers in the Catskills wilderness that afternoon.

After putting two swordfish steaks (thick, and a little larger than I would normally have picked) into my insulated shoulder bag, along with some ice, the only question was which of the several attractive vegetables I also bought would accompany them.  My considerations were basically, what would be the most compatible, the most colorful, and, to be practical, the least likely to survive well for another day or two.   When I remembered that I had some black olive tapenade on hand, remaining from an earlier meal, I decided to introduce it to the pan-grilled fish, and also I also chose to include some of the tomatoes which had been ripening on the north windowsill for a few days.

Finally, I thought that the minutina I had picked up that day, even if these lacy, toothed greens are actually less delicate than they appear, and might have lasted a few more, would be an excellent foil for everything else.

We enjoyed some half-wild strawberries from Berried Treasures (in the refrigerator since Wednesday, as I had forgotten then until I began preparing the entrée, but still tasting fantastic), with a dollop [I love that word; use it as often as I dare] of Madagascar Vanilla Ciao Bello gelato, topped with a bit of strawberry ‘self sauce’.

It was like a special birthday treat, but without the [short]cake.