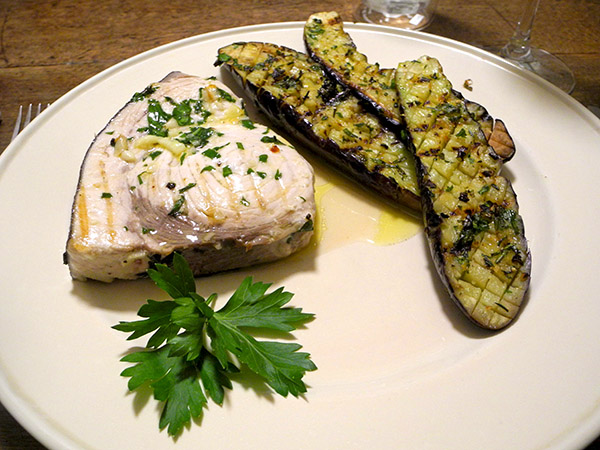 Note to self and to readers:  There’s usually no accounting for why some outings with a familiar recipe are more successful than the others, but we both thought that each of the elements in this entrée exceeded all earlier versions, and the reason I’d already repeated their formulas so often is that they were already so delicious (and subject to variations suggested by the availability of ingredients).

Maybe it’s because I’m very much a child of the 50s (Xiphias gladius were big way back then, very big), but I’ve always loved swordfish.  I’d like to think I’ve grown up a bit since first experiencing the magnificent critter, and I was never much taken with its likeness repeated in porcelain or metal gimcracks often perched above bulky television consoles, but swordfish have always carried some serious weight within my epicurean pantheon, even before I left the Midwest. I think it was the only item on the menu in those days that could persuade an auto baron to order anything other than steak or prime rib in a serious restaurant, like Detroit’s Joe Muer’s, or The London Chop House.

The mercury scare which appeared at some time after I left the Great Lakes environment for deeper waters bummed me out, because now, when I could develop a more intimate relationship with this noble fish, it virtually disappeared from both menus and fish markets (probably a welcome development for the swordfish themselves).

And then the scare abated, but I still couldn’t find much to appreciate about it in my restaurant experiences.  As in the case of tuna, I just assumed its unsavoriness was the fault of the fish.  It was only in the last decade or so that I learned how not to cook it, meaning, to be sure, not to cook it in the way it was cooked in the 1950s, and, in many places, long after.

This meal employed one of the two recipes I have followed for years; the other one is actually even simpler, and also comfortable with variations.

This is what Bodhitree’s box of eggplant looked like in the Greenmarket on Wednesday: 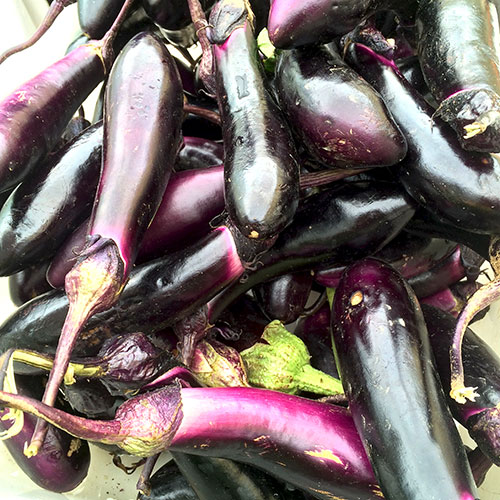