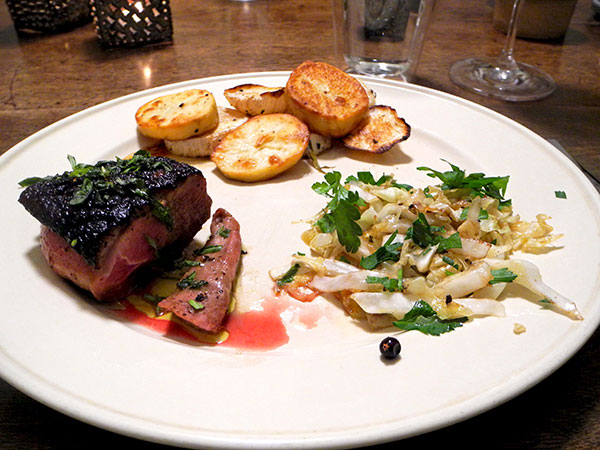 We enjoyed this pretty wintry meal on Sunday, even if it had already seemed we had probably finally moved into spring.

There was a reason for it looking like serious cold weather fare, since I had brought home almost all of the vegetables from the Greenmarket in the middle of winter, although I had picked up the duck only in the past week.  I was probably thinking of the roots and cabbage when I grabbed the duck from the refrigerator case at Eataly.

I started defrosting the breast the day before.  I’ve had the turnips for a month, but yesterday at the last minute I realize that there were only two small-ish roots remaining from the larger stash with which I had started weeks before;  I added one russet potato to the mix.  The cabbage has also been around for longer than I want to admit (okay, I’ve been occasionally peeling leaves off of the head for more than a full month), but its flavor has also survived the winter undiminished, a virtue which must have endeared it to our northern ancestors long ago.