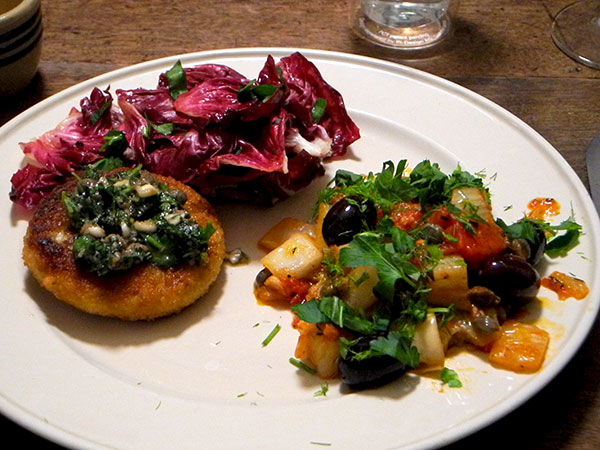 Note to self:  This was surprisingly good, especially for a meal that was heavily improvised.

Except for the fresh mint, which I picked up when I stopped by the Eataly Wine Shop to pick up a bottle of Varnelli this afternoon, this dinner was assembled entirely from ingredients I already had in the kitchen.  The idea was to not go out for anything, but to use what I already had on hand (I defrosted the crab cakes the night before), largely items I preferred not to hang onto any longer.  There was another self-imposed stipulation:  Because of our decision to watch the last two hours of ‘Die Meistersinger’ beforehand, the meal be put on the table as quickly as reasonably possible.  I managed to be successful in incorporating my existing stock, and  but I think I went a little overtime in preparing it.