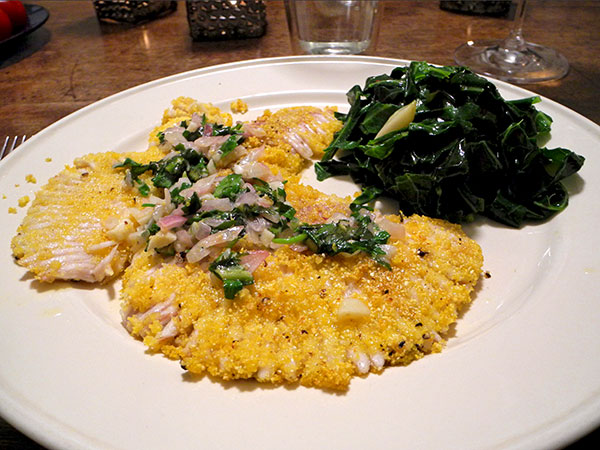 We both really like skate, and I have no idea why it’s not more popular than it seems to be.  Part of the problem may be the paucity of restaurant treatments known to most people who might otherwise be inclined to prepare this delicious fish at home, and part of it may be that not everyone has access to the really small, tender wings as do the patrons of our local Greenmarkets, which are supplied by fisherman off the eastern end of Long Island.  Last night, for the two of us, I cooked five of them.  They weighed approximately only 2 1/2 ounces each, and they all managed to fit into my 12-inch iron pan with very little space to spare.

The vegetable, collard greens, was a very late season cache from Rogowski Farm (probably the very last I’ll see there until fall). from which I was able to reserve enough for one more January meal.

It’s amazing to me, and hugely appreciated by myself and I hope many other market fans, that so many of what I will describe as ‘green vegetables’, perhaps generously in some cases, are still available here fresh at the end of January, and how coveted they are by our local home and restaurant chefs who scour the Union Square Greenmarket four days a week.

“Winter greens’? Not may years ago the produce in the stalls (far fewer in number) would have been pretty much limited to potatoes, onions, bread, preserves, maple syrup, cider, and apples.   Today, in a symbiotic relationship with their city patrons, our local Greenmarket farmer neighbors, who had already become very creative in offering new produce, have managed to adopt and create new growing methods and environments, while continuing to provide the hands-on attention and care which allow these living things to thrive. Even in the month of January it is still possible (or has been, until almost this day) to find there kale, collards, leeks, Brussels sprouts, cabbage of several kinds, fennel, spinach, tomatoes of several kinds and colors, scallions, some delicate greens (including sorrel and cress), radicchio, sage, rosemary, thyme, and an occasional aberration like the baby leeks and fresh garlic I found on Friday, also at Rogowski Farm.

While I’m crazy about root vegetables, and every year I look forward to the winter sweetness they offer, they can really shine in the company of a fresh foil, even if it’s a tiny one.