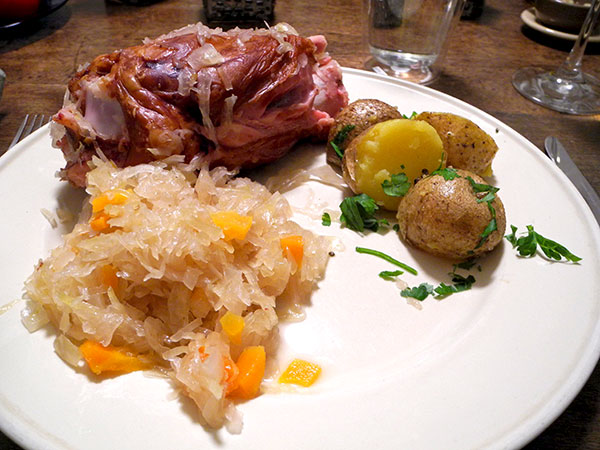 Hey, is this even the same restaurant serving as the one serving the meals uploaded here over the last few weeks?  Yes, of course it is;  it’s just that my ancient German roots pop up every so often, sometimes when I least expect it.

I think I’ve mentioned in the past that I’ve grown attached to the delicious plenty offered by the wonderful Amish folks of Millport Dairy in the Union Square Greenmarket.  On a recent visit and conversation with John Stoltzfoos at his stall, I brought back two beautiful smoked pork knuckles, weighing about 20 ounces each.  When I had spotted the Haxe on his table that day, I had immediately imagined them cooking, slowly, in a large pot of sauerkraut and aromatic vegetables.  Ideally this would be on a wintry January evening.

It should have been much colder than it was, but I couldn’t wait any longer, so tonight became the occasion for our modest Bavarian feast.  Aside from the tasting itself, this may have been the best moment:  It was about an hour into the slow cooking when I was able to share his pleasure when Barry walked into the aromas of the apartment after a ‘meetup’ earlier in the evening in Gowanus.