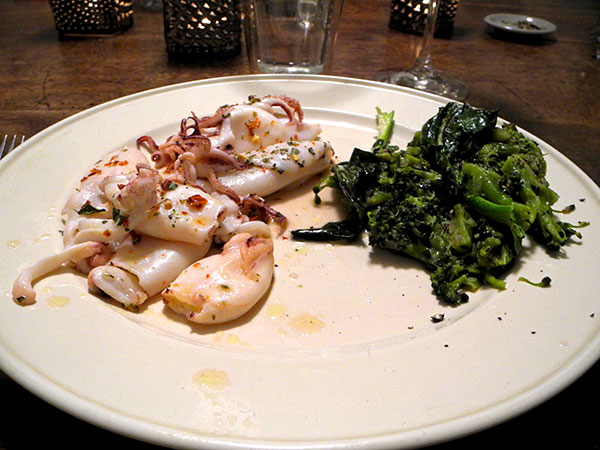 This squid recipe is as delicious as it is simple to assemble. We’ve enjoyed it often.  This time, because the cephalopods were quite small, and in the oven for just the right length of time, they virtually melted in our mouths, their juices mixed with the olive oil, the pungent dried herb and pepperoncini.

The broccoli on the other hand, was slightly more complicated, surprisingly.  For a while I thought I had completely messed up the recipe.  I found it in a folder with the word, ‘awesome’ scribbled with a red marker, in my own hand.  I didn’t remember having ever used it before (later found that I had, at least once), but the ingredients seemed to promise a perfect accompaniment for the squid:  Fresh, late-season tender broccoli, in small bunches, from a favorite local Greenmarket farmer, with anchovy, garlic, a small amount of breadcrumbs, and a little grated Parmesan.

The instructions were to parboil the broccoli gently for 10 to 12 minutes before removing it, and proceeding to add the other ingredients, each in its turn, on top of the range in a broad pan.  I should have been suspicious right there, because I rarely boil vegetables, except for a minute or two.  The Italians seem to prefer them cooked far longer.  Even before I had finished the dish I was prepared to admit failure, but, while they looked pretty worn out on the plate, I had to admit they were delicious, and surprisingly sweet.  Also very Italian.