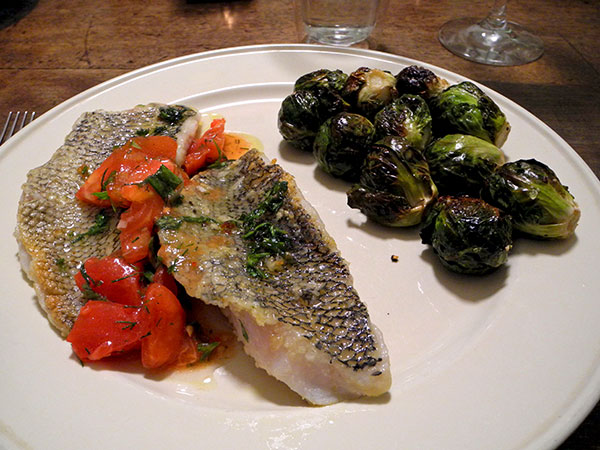 This meal really came together only after Franca pressed a gorgeous, very ripe red tomato into my hand just as I was leaving the Greenmarket yesterday.  Already the night before I had planned to buy a firm white-fleshed fish fillet, or fillets, in Union Square and accompany them with some Brussels sprouts which were waiting in the crisper drawer for their opportunity to shine.   The next day I was delighted to find that Pura Vida still had sea bass when I finally arrived at their stall some time around one o’clock in the afternoon.  That and the sprouts were pretty much going to be it for my entrée (except for some lovage or wood sorrel topping the fillets), until I passed Franca’s Berried Treasures stand.

Now I realized I had an opportunity to really open up the meal, and add some additional glorious color as well.   Uncharacteristically for me, it was only when I removed the bass from the refrigerator that I started to plan how it might introduce it to the tomato.  I don’t know whether my improvisation was a “salsa” or a “vinaigrette” (“salsa” fit in the headline here), but the marriage was a success.

One of the reasons I began this blog was to record such small triumphs, in order to be able to look back and possibly repeat them;  this was one of them, so here it is.