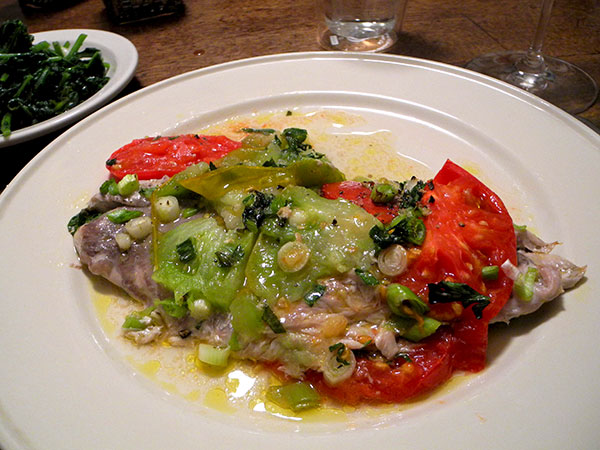 Don’t be afraid of Pomatomus Saltatrix.   I used to be, but over the last few years I’ve become very fond of bluefish (once I had learned how to prepare it).

I think I first encountered it while living in Newport, fresh off the dock in the harbor (the fish, that is).   I had heard its virtues sung locally, but didn’t realize that some of the songs were those of  Rhode Island sport fishermen, and the others assumed one could hear the lyrics describing how to prepare it.  I wasn’t a fisherman, and I’ve generally been deaf to song lyrics, so while I was pulled in by the sirens, I didn’t know what to do with rich fillets when I tried preparing them myself.  I think it must have involved poaching, and it’s possible some wine was involved, but the results told me bluefish just wasn’t for me.  That was an ancient time, before modern cookbooks, before the magic of the internet, and before the ministrations of the good Union Square Greenmarket fishmongers.

This time I pulled out a recipe which I had enjoyed several times in the past;  it’s from Mark Bittman’s “Fish: The Complete Guide to Buying and Cooking“.