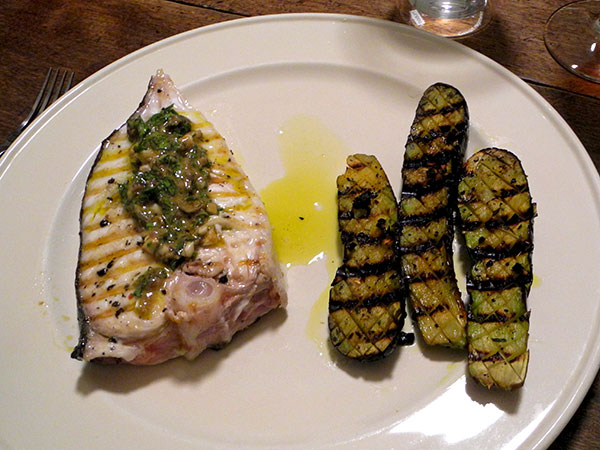 For a very long time I’ve been thinking of halibut as a kind of holy grail.   I think it’s because it’s so minimal and because it’s a beautiful piece of fish, either as a fillet or as a double steak.   I also know how delicious it is, and I know how easy to prepare – and how versatile – it is.   It’s also because I don’t see it in the Greenmarket (does it ever show up here?), and because it’s almost always very expensive in New York City.  There’s also that tantalizing picture I see almost every time I open my copy of the “Italian Two Easy” London River Cafe cookbook.  The image is appears on page 194, across from a very simple recipe for “Halibut on the Bone” (on the bone, because the taste of fish, just as with meat, gains from being cooked with the bone).

I wanted to serve fish last night, but I had been unable to get to the Union Square Greenmarket because we had to be ready for a photo shoot inside the apartment.  When we emerged from that stimulating experience hours later, I headed down the block to our local Whole Foods to pick up something which wouldn’t require much time or assembly.  I can usually count on finding a good piece of wild salmon there, but even before I had gotten all the way to the counter I spotted it:   a display of double steaks of halibut, looking exactly like those featured in the Gray and Rogers book, except that they still needed the attentions of a cook.  The price per pound was exactly half of what I’ve been seeing around town for months, so I didn’t hesitate a second.  Besides, the halibut was taken from waters just north of our own temperate Atlantic  shores (somewhere off eastern Canada), and had probably not been frozen, while the salmon would have had  to swim all the way from Alaska, and certainly had been frozen somewhere along the way.  The price of wild fish, including salmon and halibut especially, can fluctuate dramatically;  I try to take advantage of the best market opportunities.

It was delicious, it was easy (and that includes the very good  – and itself very versatile – salsa verde which can be finished even before heating a pan), and I’m going to keep looking for it in the Greenmarket.