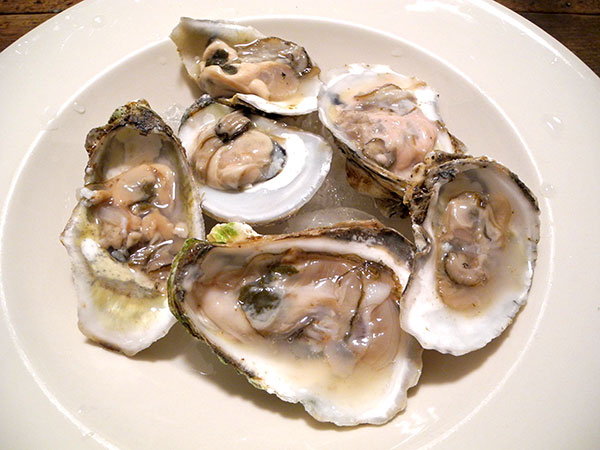 one of our favorite things, and very little prep required

A New England Fourth of July, and a remembrance

We decided on a piscatorial 4th of July, if only because it was a Friday, and I almost always buy fish if it’s a Greenmarket day.  As it turned out, there were few stalls in Union Square on the holiday almost everyone celebrates in some way, and there were no fishers.

I headed to Citarella, only blocks away (we’re so blessed in our location, for at least some things), and picked up local seafood stars for two courses, 12 Wellfleet oysters*, and a local-waters cod fillet weighing just under a pound.

Neither of us adds anything to the perfect simplicity of raw oysters, and I already had some red kale from Phillips Farms, so when planning the meal that evening I decided to keep both courses very simple,  preparing one of our favorite dishes, Mark Bittman’s “Steamed fish on kale”.  Incidentally, it’s an inspired recipe, both for its ease and for its adaptability:  Any white fish can be substituted for cod, and almost any fresh, tender cooking greens can be substituted for the kale used here.  I used olive oil this time, although I don’t know why, other than the fact that most of my cooking is done with the fruit of that tree, but I agree with Bittman that in this case butter is better.

We accompanied both courses with a Muscadet Sèvre et Maine Stéphane Orieux 2013,  from Appellation Wine and Spirits. 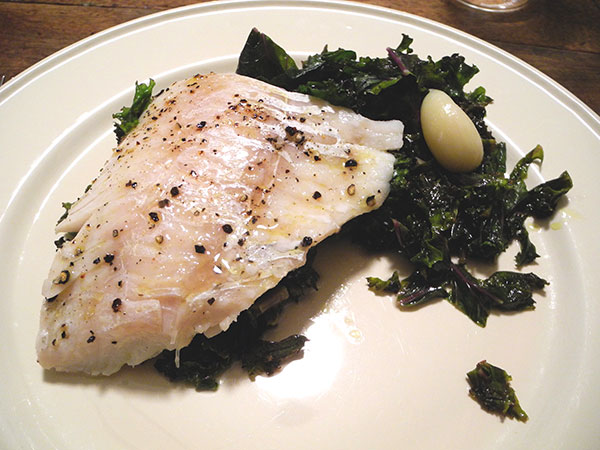 also a great favorite of ours, with only a little more work

* I believe it must have been briny Wellfleet oysters that were the comestible stars of my romantic  introduction to raw seafood in 1965.   It occurred under the tutorage of a very preppy, impossibly-handsome, older (I was 24, he was 33) Rhode Island gentleman with whom I had just begun my first affair.  The time was a glorious summer afternoon like this one, and the venue was Boston’s Union Oyster House; we sat next to each other on stools at the ancient raw bar.

May Steve be resting in peace, with his ‘drinky-poo’ – maybe  a Mount Gay and tonic – in his hand.  Note to self, and to all:  Barry was not yet born at the time.