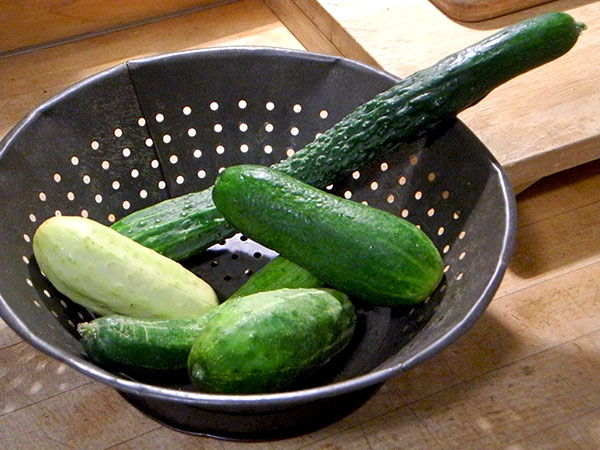 Last Wednesday, thinking to avoid a hot kitchen when we sat down to dinner, and craving a meal which would show off a good German-isch wine, I decided to assemble a meal of smoked trout with classical accompaniments, all of which could be served at room temperature. I headed for the Union Square Greenmarket to land the trout and to pick the vegetables and herbs I’d need for cold potato and cucumber salads.

Finding the trout was easy:  David Harris of Max Creek Hatchery brings some wonderful whole Rainbow and Brook (both fresh and applewood-smoked) into our town every Wednesday.  I already had some red-skin new potatoes at home, purchased  only days before from Eckerton Hill Farms, but, needing cucumbers, I returned to their stand and spotted some beauties in – as I soon found out – five varieties. I asked the cheerful vender which of them might be best for a German cucumber salad in particular; without any hesitation, she suggested I should use a mix (That would probably never have occurred to me;  I’m so literal when it comes to traditional cookery).  I picked one of each, but that evening, in the interest of portion control, our salad included only a mix of three.  They nevertheless made for a complex mix of flavors and textures in a Gurkensalat as good or or better as any I’ve ever tasted.

The relatively simple recipes for the cucumber and potato salads came from my trusty old copy of Mimi Sheraton’s classic “German Cookbook”.   I added lovage to the cucumbers (my innovation this time, because I had it, and because it too is one of my favorite things), then parsley and chive to the potatoes.  All the herbs came from the Greenmarket.   In addition to the fresh herbs, the cucumber salad involved white wine vinegar, white pepper, and  bit of sugar, while the potato salad included shallot (in lieu of onion, which I strangely didn’t have), beef stock, white wine vinegar, and white pepper there too.

The condiment for the trout was my own improvisation: I used softened cream cheese, a bit of softened butter and a small amount of @ronnybrookfarm‘s terrific plain yoghurt, together with grated horseradish from John D. Madura Farm (that stuff keeps forever in the crisper), a taste of L’ekama, which had shown up in a ‘goody bag’ a while back, to spice it up. some ground white pepper, and dill. I also sprinkled chopped dill directly on the trout fillet itself.

The wine?  We lingered long over this meal, partly because we didn’t have to worry about the food getting cold (or, of course, warm), so we were able to sample a bit from two very different bottles.  The first was a very pleasant Sylvaner/Riesling blend from Rheinland-Pfalz, an der Nahe, produced by Weingut Rapp;  the second was an outstanding Niederösterreich Grüner Veltliner from Landhaus Mayer.

We expect to be eating with a German accent more often. 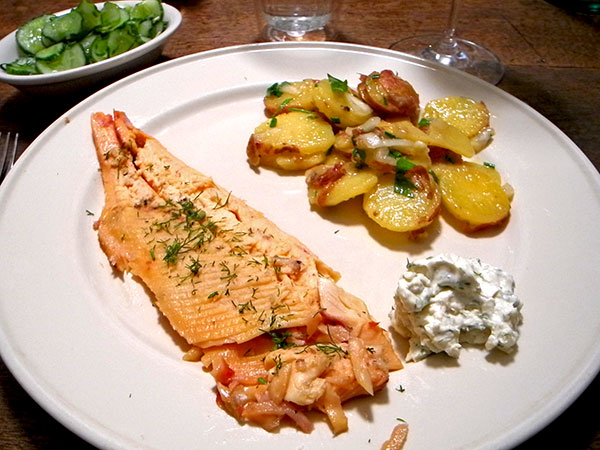 very cool on a hot night