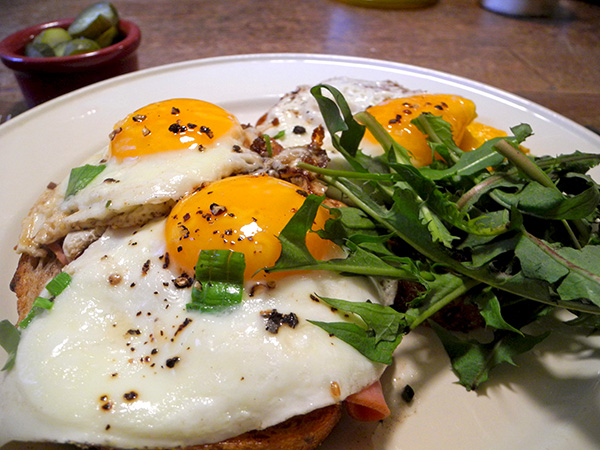 Yesterday I had come across a particularly fetching photograph of a Strammer Max (if you’re fond of eggs, there are actually many fetching photographs), so today I decided to essay this German breakfast classic for the first time, substituting its ham and eggs approach for our usual Sunday bacon and eggs (which always boasts a number of extras, both rotating and new). Both versions include toast, but the German tradition is much more straightforward (or ‘plain’? I promised myself not to say more bland) than my own embellishment of the classic American formula, meaning it eschews almost all of the varying herbs, spices, and seasonings that I usually add to the basic bacon and eggs thing, to keep it exciting week after week.

I still couldn’t just leave it alone, so today I added some chopped Frühlings-Knoblauch (Eng. spring garlic), and wilder Löwenzahn (Eng. wild dandelion), neither unknown in German lands, but perhaps not normally a part of Strammer Max, in addition to the very German Petersilien (Eng. parsley).

Even though I expect to be manipulating this simple Rezept beyond recognition on future Sundays, when it’s likely to evolve into something neither German nor American, but certainly at least a little ‘brown’, I’m going to remember the original inspiration.

Note: this Sunday mid-day meal is almost always both breakfast and lunch for us, and it’s followed only by dinner.