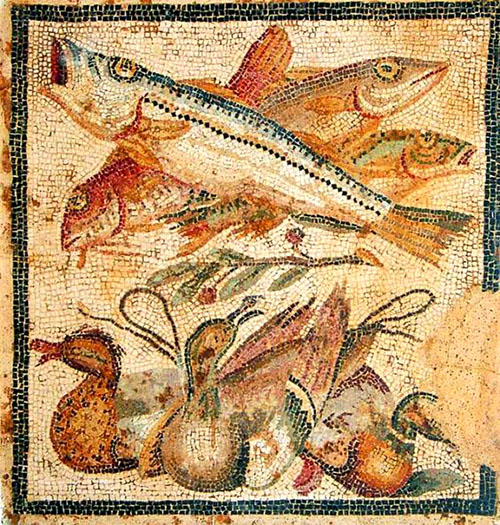 Duck: Fish or fowl? Sometimes it’s been both.

The image above is from Pompei, and while I don’t mean to suggest that the Romans confused waterfowl and seafish, I find it amusing that some later Europeans did. 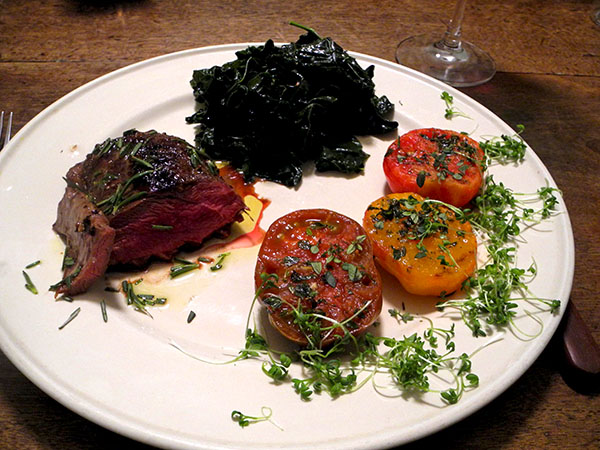 We’ve been feasting on a lot of fish lately, and even on Wednesday, the night following this meal featuring pan-fried duck breast, when I had a night away from the kitchen, there was seafood. As almost always, it came from New York waters; as almost never, we sat at a long communal table, outside, at dusk, just a block from the Hudson. The venue was Michael Anthony‘s restaurant, Untitled, the dish, cioppino, the terrific main course of a farmer’s dinner which otherwise almost exclusively featured the very fine vegetables of Alewife Farm.

On Tuesday, the day before, we had enjoyed an entrée of duck breast at home, which means I did not prepare seafood. But wait! In some circles duck is considered fish, or at least that was the case during a time when the consumption of fish was a weighty concern through much of the Western world.

Medieval catholics would often really stretch the definition of ‘fish’ in order to be able to enjoy more of their favorite foods on Fridays or fast days, and the duck was considered to be in that category, as was other aquatic life such as geese, puffins, dolphins, and whales. As late as the 17th century, at least in Quebec, the Church officially declared that the beaver, as an aquatic animal and a skilled swimmer, was actually a fish [apparently arguing from “..the ‘Summa Theologica‘ of Thomas Aquinas, which bases animal classification as much on habit as anatomy.“].

I could go on, and, because I had been a Catholic as a child, and have always been interested in every aspect of food, I will. Young rabbits were considered fish and not meat (I do not know why), as were frogs, snakes, and (as of a Louisiana 2010 episcopal decree) alligators.

So we had duck. It didn’t seem at all like fish. It definitely didn’t feel like a fast day.

[the image at the top is from the Milan Museum Guide]