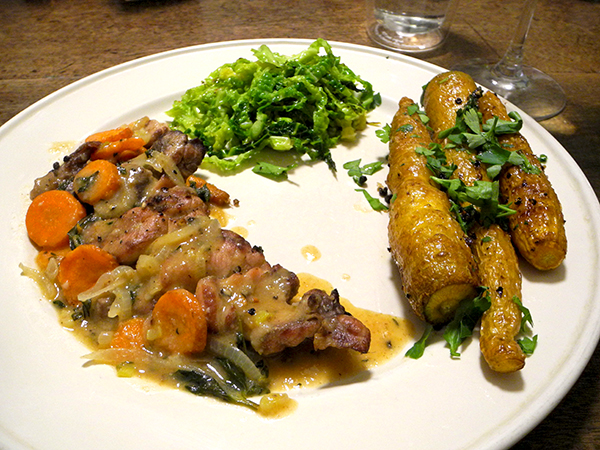 I thought it would be so easy to come up with a rather simple modern recipe for sweetbreads, but I was surprised at how few resources there were, and none of those I found looked interesting, or as uncomplicated as I wanted, at least in the time I had allotted myself.

Apparently these innards themselves haven’t been considered modern, at least until recently.  I’m probably not the only one who’s been afraid to cook ris de veau, although not for lack of an appreciation of their culinary pleasures.  I attacked them in my own kitchen once, many years ago, working with the very elaborate and very precise instructions supplied by Julia Child.  I didn’t get lost in the process, and they were delicious, but I must have thought they just weren’t worth the trouble (as with the time I made tripe, also by her formula).

Maybe I had just forgotten about them, since they aren’t found next to the chops and cutlets in the neighborhood meat case (to be fair, sweetbreads are very perishable, and so would generally have to be ordered, if available at all.

I do order them, in good restaurants, almost every time I see sweetbreads on a menu.  For the record, it’s been one of the few appetizer or entrée ‘centerpieces’ I don’t hesitate to order when eating out, since I don’t expect to be preparing it myself (oh, the hardships of an active, and at least somewhat adventurous home cook – and his perfect muse).

Then last night I found myself searching everywhere for sweetbread recipes, in my files, book shelves, and on line. After a while I noticed that a couple of hours had flown by, and I now didn’t have much time left to maneuver.

I ended up going with what seemed to me the simplest and least constructed recipe of the few I had come across. I was surprised that it turned out to be probably the most old-fashioned one. It was from my half-century-old copy of  Craig Claiborne‘s ‘The New York Times Cookbook’ [$25 new here; $10 to $15 here, at Strand]. Years after I had bought it, as I moved into other styles of cooking, and thinking Claiborne was a bit, well, ‘old-fashioned’, I had relegated it to the top shelf in the kitchen, where it was both out of sight and out of mind, only returning it to the company of its ‘colleagues’ when I had a new, large bookcase built in another room.

Lately I have found the 700-page volume surprisingly useful, for its catholicity (including dishes now obscure), and for its tendency to cut to the chase, omitting a lot of the baggage which accompanies many more contemporary recipes (like, I suppose, what I’m writing now).

The offal was good (love how that sounds), very good, and I’m now not going to be timid about initiating a future acquaintance with this wonderful cut – and with new recipes.